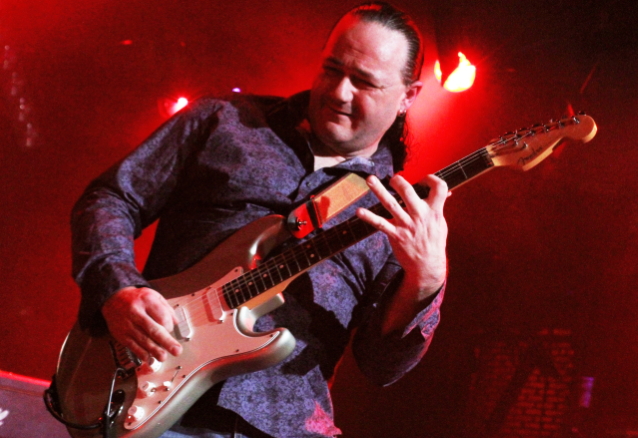 Cliff Moore, the younger brother of legendary rock and blues guitarist Gary Moore, will release a new rock album titled "2020 Vision" on March 25. The disc's first single, "Welcome To The Madness", is out now on Apple Music, Spotify and Amazon.

According to a press release, "2020 Vision" is "a collection of songs which have been inspired over the last year by social and personal experiences. It is primarily a rock album and features the guitar heavily (of course)."

Cliff was born in Belfast, Northern Ireland in the sixties. He was first introduced to music by his parents; his mother, who was a great singer and his father who was a local music promoter.

His earliest memories of music are of hearing THE BEATLES and FLEETWOOD MAC on the radio and also watching THE WHO on "Top Of The Pops". Thus began a lifelong love of music and, in particular, the guitar.

Moving to England as a child, he was given a second-hand acoustic guitar by his father at the age of thirteen as a Christmas present. He would take this to school and play it at every opportunity although he had no real idea about theory or technique on the instrument and instead, would learn to play songs by ear.

The following year, his mother bought him his first electric guitar, which was an Aria Les Paul copy.

A chance conversation shortly after with two friends led to the formation of Cliff's first band, STAGE FRIGHT, which went on to play at various local youth clubs and school parties. This band morphed into various other line-ups over the next few years where Cliff was able to develop both as a player and songwriter.

In the early eighties, the CLIFF MOORE BAND was formed and he was able to perform his music to a wider audience. This led to the involvement of a manager and publishing deal. The advance money from this deal financed Cliff's first custom-built Stratocaster which led to a lifelong passion for this type of guitar.

Since the eighties, Cliff has been, for the most part, a professional musician and has taken part in countless gigs and recording sessions. These have taken place on five continents around the world and in the last decade, Cliff has built up a solid fan base around Europe and regularly visits there to play.

In recent years, Cliff has been fortunate to have shared the stage with some of the greatest contemporary blues/rock musicians around.