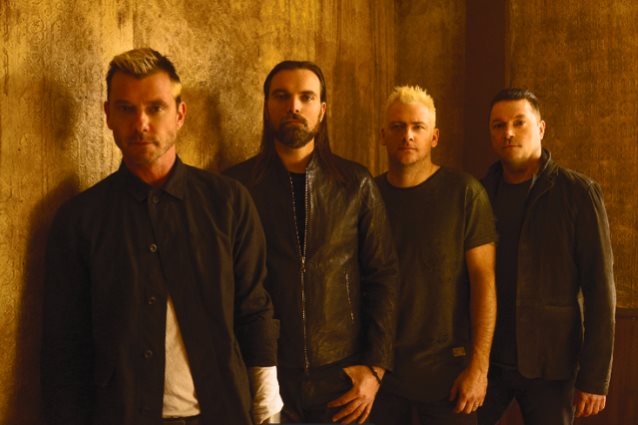 Rock group BUSH and frontman Gavin Rossdale have entered into new worldwide partnerships with BMG. The agreements include a new publishing deal for Rossdale's extensive songwriting catalog and the band entering into a new recording deal to release a remastered version of latest album "Black And White Rainbows" with bonus tracks. The album was released digitally via Zuma Rock Records/BMG, with a CD to follow.

Written, recorded and produced by Rossdale, the seventeen-track expanded edition of "Black And White Rainbows" includes two new tracks, "This Is War" and "Alien Language". You can listen to the official audio below. The band, rounded out by drummer Robin Goodridge, guitarist Chris Traynor and bassist Corey Britz, have been touring extensively in support, including a North American headlining run earlier this year and this week they wrap a string of European dates.

Said Rossdale: "I'm very excited to be partnering with BMG — a very powerful label with the passion and capability to bring BUSH to a very wide audience."

Zach Katz, president, repertoire and marketing, BMG U.S., said: "Led by Gavin and his extraordinary catalog, BUSH remains one of the most successful bands in rock. We welcome them to BMG and look forward to continue building on their musical legacy."

Over the course of its career, BUSH has sold nearly twenty million records in the U.S. and Canada alone. They've compiled an amazing string of eighteen consecutive Top 40 hit singles on the Modern Rock and Mainstream Rock charts. Eleven of those hit the Top 5, six of which shot to No. 1, "Comedown", "Glycerine", "Machinehead", "Swallowed", "The Chemicals Between Us" and "The Sound Of Winter". As a solo artist, Rossdale hit No. 1 on iTunes with 2008's "Love Remains The Same", which sold close to two million copies alone. In 2011, BUSH re-entered the fray with "The Sea Of Memories", its first release in ten years. That album saw them return to the top of the charts in grand style, as lead single "The Sound Of Winter" made rock radio history as the first self-released song ever to hit No. 1 at Alternative Rock Radio (where it stayed for six consecutive weeks). They followed with "Man On The Run" and toured endlessly in support, playing to packed-house crowds around the world.