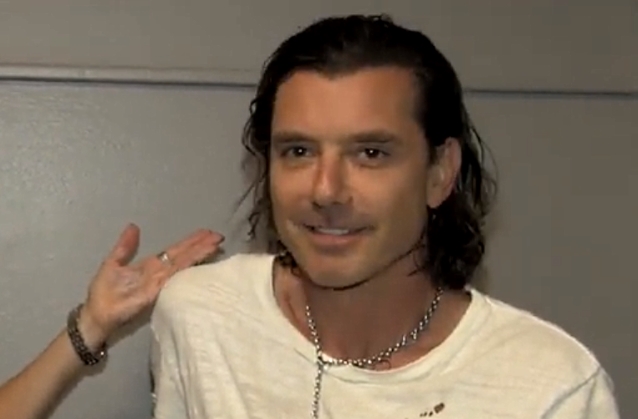 BUSH frontman Gavin Rossdale spoke to WDHA's Terrie Carr about the band's next studio album, "The Mind Plays Tricks On You", which is tentatively due in the fall. The disc was recently recorded at a Los Angeles studio with film composer Tyler Bates, who has previously worked with Marilyn Manson.

"We work really good together," Gavin said about Tyler. "We've become really fast friends and seem to be on the same wavelength. I don't know what it is. I joke with him that he's just basically better at everything than I am. Maybe not singing — I don't know — but he's really fantastic in the studio, and we get along great. We're on the same page. You know when things are right because it's effortless and it's quick and we have a great time doing it."

The first taste of the Rossdale-Bates collaboration is the recently released single, "Bullet Holes", which is also featured in the film "John Wick: Chapter 3 - Parabellum". A Jesse Davey-directed music video for the song made its online debut in May.

"The weird thing is that 'Bullet Holes' is one of four songs we wrote together, and it was never seen as the first single or anything like that," Gavin told WDHA. "It was an outlier in the sense of that leading the race. So I'm really excited for people to hear the record, because it's not like 'Bullet Holes' is this sort of, like, one song is good and the rest are kind of turkeys. It's not a turkey sandwich after that…"

He continued: "The weirdest thing is to get that incredible kickstart with 'John Wick', and to be involved with that is really… the context it came out in was really exciting and really interesting. So now I'm excited for the next [single], of course. And that will then be a precursor to the whole record, and people can make up their own mind."

Rossdale recently told Consequence Of Sound that BUSH's new album turned out more aggressive than some of the band's recent efforts. He explained: "I decided to make a really heavy record. The last record I made was a bit more commercially minded because for whatever reason, I wanted to do that. But this time I was [inspired by] playing so many live shows and all these heavy metal festivals."

BUSH is currently on the road with LIVE. "The Alt-Imate Tour", a co-headline summer run, sees BUSH and LIVE celebrating the 25th anniversary of their respective landmark albums "Sixteen Stone" and "Throwing Copper". Produced by Live Nation, this hits-packed road show is hitting arenas and outdoor amphitheaters in 33 cities across the country, kicking off June 6 in Mashantucket, Connecticut, with stops in Boston, Los Angeles, Atlanta and more before wrapping September 8 in Rochester, Michigan at Meadow Brook Amphitheatre.