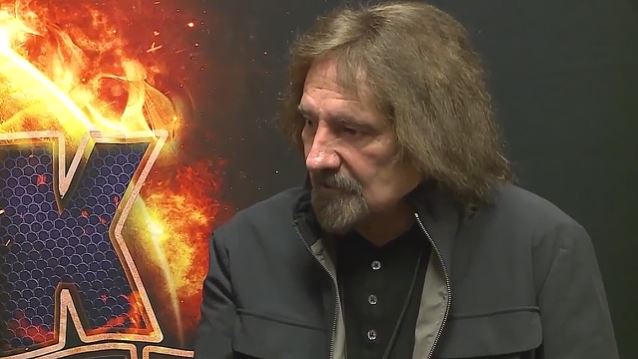 GEEZER BUTLER On BILL WARD's Absence From BLACK SABBATH Tour: 'His Health Has To Come First Before Anything'

BLACK SABBATH bassist Geezer Butler has denied that original SABBATH drummer Bill Ward's absence from the band's farewell tour is the result of a financial dispute, explaining that Ward "hasn't been well for a long time" and is not physically capable of taking part in a lengthy tour.

Ward stepped away from the SABBATH reunion in early 2012, releasing a statement that asked for what he called a "signable contract" from his bandmates. He was also reportedly insulted when SABBATH offered him a contract stipulating that he would only play a portion of the show each night, with another drummer along to take over.

In a brand new interview with Classic Rock Revisited, Butler was asked why SABBATH just doesn't give Bill the money he is asking for so that the drummer could take part in the band's final tour. He responded: "It's beyond the money thing. It is not really anything to do with that. It is whether he's capable of touring or not. On the '13' tour, he was not on that tour. About a week after we started, he had to go into the hospital for major surgery. We would have had to cancel the tour if Bill was still with us. He hasn't been well for a long time. He's had a couple of heart attacks."

He continued: "You have to face facts when you get to our age and you're not in great, great health, whether you can go out on the road for two years, or whatever. It is a hard life to do. The easy part is when you're on stage playing. It is all of the traveling and everything else that comes with it that is the hard part. I think Ozzy [Osbourne, SABBATH singer], in particular, didn't think Bill would get through it. He certainly wouldn't have got through the first part as he was in the hospital. We can't keep canceling tours just because the drummer can't play."

Butler added: "We started out with Bill on the '13' tour. That is the way we all thought it was going to be, that Bill was going to be part of this whole thing. It just turned out that is wasn't to be. His health has to come first before anything."

Geezer also talked about SABBATH's current touring drummer Tommy Clufetos, who has previously played with Osbourne, Ted Nugent, Alice Cooper and Rob Zombie. He said: "Tommy is absolutely phenomenal. I’ve played with other drummers, but Tommy really gets the way Bill Ward played. A lot of drummers don't play like Bill does. Tommy is just so versatile. He always asks me if he is playing the part right. If he is not doing one particular thing, we will tell him and he will take it in. There are no big ego trips. He just loves playing. Even through rehearsals, he was saying, 'I wish we could go and do gigs' instead of going home when he was done. He has a ton of enthusiasm. He is an amazing drummer. He is a great guy. He doesn't do drugs and he doesn't drink."

Osbourne told The Pulse Of Radio during SABBATH's last tour that Ward was not in shape to participate. "Bill Ward has got the most physically demanding job of the lot of us, 'cause he's the timekeeper," he said. "I don't think personally he had the chops to pull it off, you know. The saddest thing is that he needed to own up to that, and we could have worked around it, whether we had a drummer on the side with him or something."

As recently as last September, Ward insisted that he was quite capable of playing a full concert with the group, despite the bandmembers themselves saying the opposite. He told Ghost Cult magazine: "I was never in a position where I was never able to drum. It's really sad that those statements made about me that inferred that I wasn't able to drum.

He reiterated: "Never at any time was my drumming impaired, my health impaired or my ability to play drums. I'm so angry about those suggestions and that was going on."

In an interview with Rolling Stone , Ward revealed his terms for a "signable" contract with SABBATH, saying: "I wanted to earn some better money than we had been [paid] in the past for festival gigs. I think it was somewhere like $80,000 for the festivals, which I can hear everybody gasp now, but $80,000 is not a lot of dough when you're playing festivals."

SABBATH's "The End" tour kicks off on January 20 in Omaha and will encompass about a year, including breaks.

Brad Wilk played drums on SABBATH's 2013 reunion album, "13", while Clufetos was behind the kit for the group's world tour.