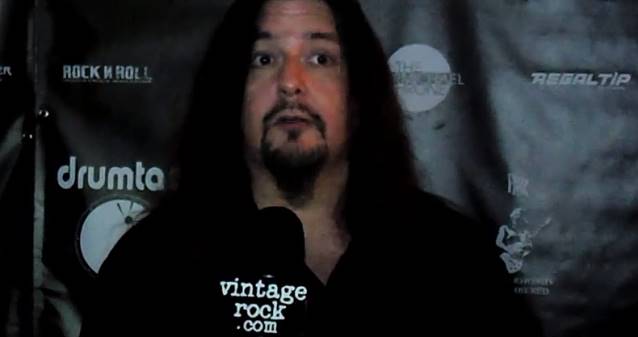 VintageRock.com conducted an interview with legendary extreme-metal drummer Gene Hoglan (TESTAMENT, DEATH, STRAPPING YOUNG LAD, DARK ANGEL, DETHKLOK) at the Bonzo Bash NAMM Jamm 2014 "The Ultimate Celebration To The Ultimate Drummer - John Henry Bonham Of Led Zeppelin", which was held on January 23 at The Observatory, in Santa Ana, California. You can now watch the chat below.

Speaking about the influence that Bonham has had on his drumming, Hoglan said: "As I was growing up, I will freely admit [Bonham] was not a huge influence on me. It was not until I got older and realized how badass he was. My influences were more, like, Peter Criss and Neil Peat and guys like that, Tommy Aldridge, Cozy Powell… But getting to know Bonham's whole style as I got older, he was the most well-rounded drummer around; he could do it all. And he was doing it on really bogus equipment back then too."

To this day, Hoglan has never had a drum lesson in his life. The one time he did submit to a lesson, it turned into an embarrassment for the would-be instructor. "I did a few double-stroke rolls and he was like, 'Um, I can't even do that, so I don't think this lesson thing is going to work out,'" he told DRUM! magazine.