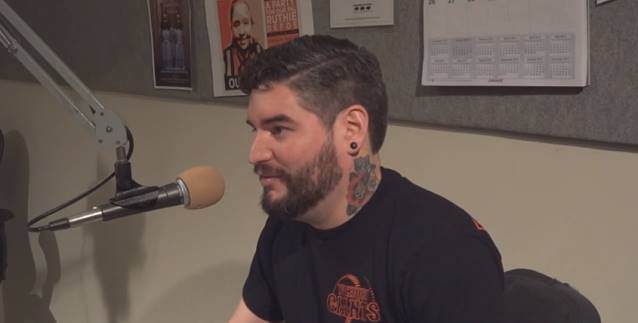 On January 17, SUICIDE SILENCE/ex-ALL SHALL PERISH vocalist Hernan "Eddie" Hermida was interviewed by "Metal Zone" host Nikki Blakk of the San Francisco, California radio station 107.7 The Bone. You can now watch the chat below.

"I believe that they will do the best thing for that band.

"They made the decision to have me not be in the band anymore. All that's on the Internet, if you wanna read up on how I feel about it.

"I have nothing but support for the band that I helped establish and really, really get out there.

"The original members are around and very supportive.

"Everybody who's been a part of that band has done nothing but push that ship forward, and that's what I'm gonna continue doing.

"I'm really looking forward to what my friends are gonna put out there in the future.

"I really hope the best for everybody. That's all I can say."

"That is easily a year of ALL SHALL PERISH not being 'allowed' to do anything; possibly more than a year. There were other rules, too, but this one was huge. When we heard this, we immediately all got on the phone with Eddie and asked him how him being in both bands could ever work, especially after this whole DEATH ANGEL thing. Eddie still insisted it could work but also maintained that SUICIDE SILENCE would be his priority. We asked Eddie if he was quitting and he said, 'No, I'm not. If you want me out of ALL SHALL PERISH, you'll have to fire me.'"