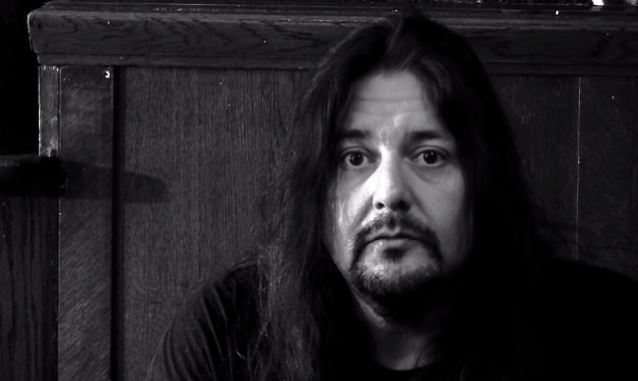 Speaking about the progress of the songwriting sessions for DARK ANGEL's much-anticipated comeback album, Hoglan said: "We don't feel rushed. DARK ANGEL definitely wants to capitalize on the momentum that 2014 was… And if that means that we have to… We're not taking our time — we are are trying to hurry — but we're not hurried; we're just trying to make the best album we can. And when the time's right, that's when it's right. DARK ANGEL is going to do whatever it does. And the one thing that we're gonna get out of this is a pretty damn kick-ass record and hopefully some really cool touring, and we'll represent it live really well… As for a release date, I sure couldn't even speculate about that. I just figure when the time is right and we've completed a really killer, killer, awesome record, then that's when the album's gonna come out."

Regarding DARK ANGEL's mindset going into the making of the band's new album Hoglan said:"I am going into this, and Jim Durkin [guitar], my writing partner, we're going into this just… We wanna devastate people. We just don't wanna put out 'Ah, good record, 'Yeah, cool, man. Those guys came back. Yeah. Cool. Cool album.' No. We wanna put out something that's gonna destroy everybody, and I think that's what every metal band wants to do. Jim Durkin's such an amazing riff writer, and I'm pretty… not too shabby myself. So the riffs are gonna be crushing and catchy and awesome and evil. It's gonna be everything you've ever wanted from a DARK ANGEL record. It's gonna definitely sound like DARK ANGEL; that's all over the stuff that we're writing so far. And that's really cool. It's not like it's, like, 'Oh, man, they came back and now they sound like somebody else.' No. It sounds like DARK ANGEL. We're gonna just try to write as ball-crushing an album as possible. It can't be too heavy, it can't be too catchy, the drum beats can't be too insane…"

He continued: "When we were doing 'Darkness Descends', there were no rules. Everybody was kids back in those days, and there wasn't rules, like, 'Your singer has to sing like this,' and, 'You have to write about this kind of subject matter.' We're making this up as we go. So we're making the rules, I suppose. And a few years later, things started becoming more regimented, I suppose — like, if your vocalist growls, you're a death metal band; if he barks, you're a thrash band. It's, like, there's a category that is very simply put, but I don't know if DARK ANGEL ever fit into any category. That's why we always just called ourselves 'caffeine metal,' because at least we were the equivalent of a few caffeine pills, or a meth binge or something."