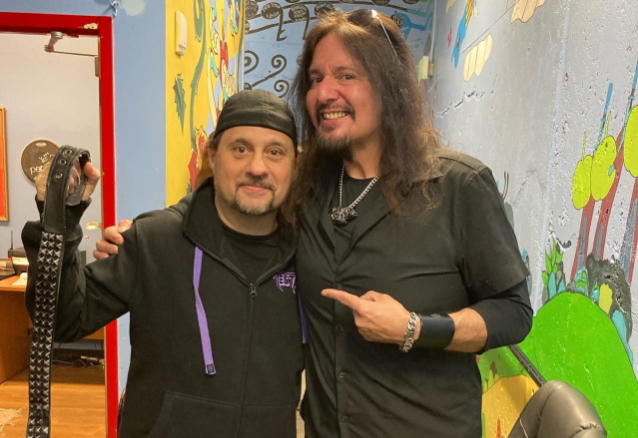 GENE HOGLAN Says His Split With TESTAMENT Was 'Very Amicable', Calls DAVE LOMBARDO 'A Natural Choice' To Step In

Gene Hoglan has opened up about his latest departure from TESTAMENT.

The veteran San Francisco Bay Area metallers announced Hoglan's exit from the group in a social media post in January. He has since been replaced by Dave Lombardo, an original member of thrash metal legends SLAYER, who was previously the guest drummer on TESTAMENT's 1999 studio album "The Gathering".

In a new interview with the "Talk Toomey" podcast, Hoglan attributed his split with TESTAMENT to "scheduling." He said (as transcribed by BLABBERMOUTH.NET): "It was a very amicable split, and nobody wanted it to happen. But I know TESTAMENT, they've gotta keep going."

Elaborating on the scheduling conflicts that resulted in his departure from TESTAMENT, the 54-year-old musician said: "During the pandemic, I took time to start curating a lot of my projects, a lot of the things going on, so when I was laying things down on the calendar, they were just starting to kind of conflict with some of TESTAMENT's plans, and it's understandable. So when it came down to, 'Man, we all have to do something here.' And it all came together pretty easy, pretty quickly for TESTAMENT. When I was, like, 'Guys, I don't know if I can make all what you need, and I know you guys need somebody there slamming for you guys the whole round.' Bringing in a guy for a few dates here and there while I take off and do some one-off kind of things, or while I've had album projects planned for coming up in summer 2022 planned in 2021 kind of thing. So it just became a situation where it's, like, 'Man, you guys need to keep moving forward. I need to keep moving forward myself. You never know about the future, but at least for right now, we'll get you guys somebody else.' And look who they ended up with — the mighty Mr. Dave Lombardo. Win-win all over the place. TESTAMENT fans are super happy."

Hoglan went on to say that he was aware Lombardo's return to TESTAMENT was "going down" a few weeks before it was announced. "I knew a couple of months beforehand," he said. "People were asking, 'Do you know who the new guy is? Oh my God?' And I'm, like, 'Let me tell you this: TESTAMENT fans, heavy metal fans, drumming fans are all gonna be super happy when they find out who the man is.' And sure enough, it all worked out fantastically for all of us, so hooray — everybody gets to move forward and everybody's happy. So it's a win-win all over the place."

Gene reiterated that there is no bad blood between him and Lombardo or any other member of TESTAMENT. In fact, when TESTAMENT played in San Diego on April 12 as part of "The Bay Strikes Back Tour", Hoglan shared a backstage photo with Lombardo and wrote in a caption: "It was great to see my bros in the mighty TESTAMENT and welcome Mr. Lombardo back into the family. He crushed it and we had a great time catching up on some olllllld times."

"Dave and I have been pals since we were both teenagers," Hoglan told "Talk Toomey". "We did our very first tour together. I was 16, he was 18 — something like that. I've known Dave since I was 15 and he was probably 18 — something like that. So we've known each other forever. [SLAYER's] very first West Coast tour I was their light guy for, and that kind of thing. So we go back a long way. And hell, man, I got to make a little vocal contribution to 'Show No Mercy'. Hey, man, that was on the second thrash metal album ever. How awesome is that? So Dave and I have been pals for a long time, and I am so happy that he's the man for the job. It was a natural choice. It worked out great. So I was really stoked to go down there and be a part of that night. It was great; we had a great time. We're all still friends. It's a big family, totally, so it's all worked out pretty darn smooth."

Lombardo discussed his return to TESTAMENT during a March 1 appearance on SiriusXM's Liquid Metal with host Jose Mangin. Asked if he had to physically audition for the drummer spot in TESTAMENT this time around, Dave quipped: "I just sent them a link to my Wikipedia. 'I've done these records, including one of yours. Can I come back?' [Laughs]"

Lombardo said that he reached out to the TESTAMENT camp the same day that the band announced it was splitting with Hoglan.

"I was still asleep, and my wife, she just said, 'Hey, Gene just left TESTAMENT,'" Dave recalled. "And she's been always telling me, 'Man, I can't wait for you guys to get together for that 'Gathering' reunion.' 'Cause we had been talking about this two and a half, three years ago — before the pandemic. And so I immediately — I didn't even get my other eye open and I was texting [TESTAMENT singer] Chuck [Billy]. I said, 'Hey, man, what's going on?' I don't know exactly what I mentioned in my text, but it was very simple, 'Hey, what's happening?' And he immediately called me back. And I remember Tiffany [Chuck's wife] was on the phone; Chuck was on the phone. We were, like, 'Hey.' It was a great come-together moment, like, 'Hey, here we go. This is the moment we've been waiting for.'"

Night before last, it was great to see my bros in the mighty Testament and welcome Mr. Lombardo back into the family. He...