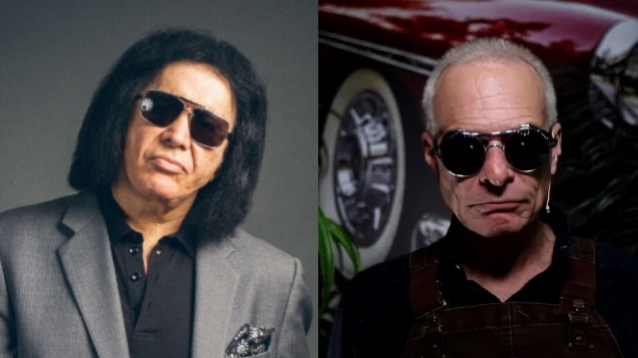 Gene Simmons has once again apologized to David Lee Roth for implying in a recent interview that the VAN HALEN frontman was past his prime.

Roth performed as the opening act for the February/March 2020 North American leg of KISS's farewell tour, but is not making any appearances on the rescheduled KISS shows which kicked off on August 18 in Mansfield, Massachusetts. Simmons explained Roth's absence from the trek by telling Rolling Stone: "[Roth] took being a frontman way beyond anything. And then, I don't know what happened to him … something. And you get modern-day Dave. I prefer to remember Elvis Presley in his prime. Sneering lips, back in Memphis, you know, doing all that. I don't want to think of bloated naked Elvis on the bathroom floor."

Apparently irked at Gene's comments, Dave took to Instagram last weekend to share an image of a young boy wearing shades and extending the middle finger to the camera along with the words "Roth to Simmons:" Dave posted the image 18 times.

Now Simmons has once again clarified his original statement, telling Marci Wiser of the 95.5 KLOS radio station that his words were misconstrued.

"It doesn't matter if somebody misunderstood what I meant; it only matters if I hurt somebody," he said (as transcribed by BLABBERMOUTH.NET). "So I'm deeply sorry I hurt Dave's feelings. Obviously, that was not my intention, because privately and publicly I've always said nobody touched David in his prime — not [Mick] Jagger, not Robert Plant. Nobody. He changed what a modern frontman was. And then the subject went onward to other subjects, and Elvis came up.

Asked if he has been in contact with Roth in the past week in an effort to smooth things over, Simmons said: "I haven't. I've tried to reach out. I haven't been able… I never had Dave's contact info, but historically speaking, I'm the guy that put the band originally on the map — signed them to my deal, produced a 24-track demo. And with that I'm told how that's how they got their deal with Warners. I never asked for a dime. That was out of my pocket, and I forgave them whatever they owed me contractually. I just tore up the contract and said, 'God bless.'"