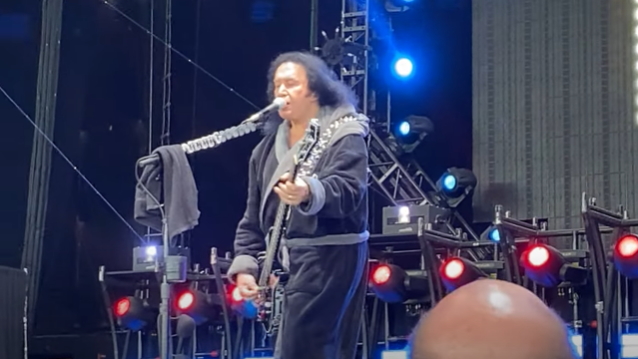 Mike Brunn has uploaded a pre-show soundcheck video of "unmasked" makeup-less members of KISS — including bassist/vocalist Gene Simmons donning a robe — performing a couple of songs and answering fan questions on May 14 at the XFINITY Theatre in Hartford, Connecticut. Check out the clip below.

KISScharges $270 for the "Pre-Show Performance And Q&A Experience" on its current tour. This package does not include a ticket. You must purchase a ticket to the show in order to attend this VIP Experience. The package includes access to a five-song electric soundcheck and a question-and-answer session plus a commemorative KISS "End Of The Road" VIP package laminate.