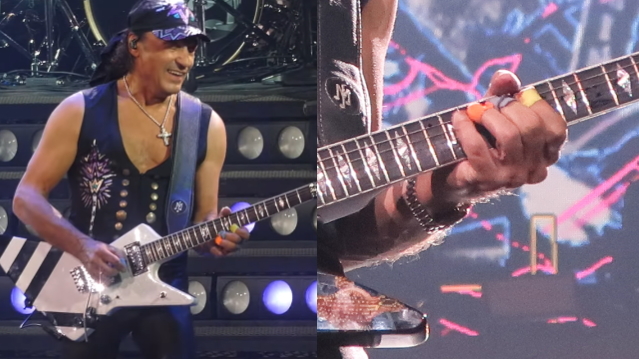 Rock journalist Robert Cavuoto has shared a photo of SCORPIONS guitarist Matthias Jabs performing with his bandmates in New York City a little over a week ago, with the fingertips on Jabs's left hand covered in multi-colored Band-Aids and blood visible on his guitar's fretboard.

The picture in question, which can be seen below, was taken on May 6 when SCORPIONS played a historic show at Madison Square Garden to celebrate Bangladesh's 50 years of independence. The Golden Jubilee Bangladesh Concert marked the German hard rock legends last live appearance before it was announced that they were postponing the first three gigs on the European leg of their 2022 world tour due to an unspecified injury suffered by Jabs.

The shows in Lisbon, Portugal (originally scheduled for May 10),Toulouse, France (May 13) and Lille, France (May 15) will now take place later in the year.

The SCORPIONS tour is expected to resume on May 17 at the Accor Arena in Paris, France.

SCORPIONS singer Klaus Meine said in a statement: "We very much regret having to disappoint our fans in the three cities that were next on the schedule of our world tour 2022 and ask everyone who had already secured tickets for their understanding."

Last week, SCORPIONS announced that they will return to North America on the "Rock Believer" world tour with special guests WHITESNAKE on the David Coverdale-fronted outfit's farewell tour.

Did anyone notice the band-aids on Matthias Jabs left hand fingers & blood on the guitar fret board at Madison Square Garden NYC 5/6/22? @scorpions@TheGarden#MatthiasJabs#MSG@BLABBERMOUTHNET@BraveWords666@rocknrollgarag1@RockTheseTweets@Guitarist_Magpic.twitter.com/Ig0KHfE522