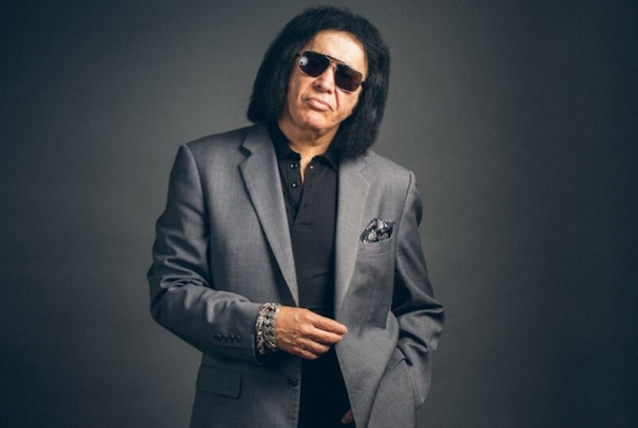 Gene Simmons paid tribute to Aretha Franklin, the "Queen of Soul," who died Thursday after it was reported earlier this week that she was "gravely ill" in Detroit. Her family said that the cause of death was advanced pancreatic cancer of the neuroendocrine type.

During an appearance on HLN's Franklin tribute show on Thursday, the KISS bassist/vocalist was asked what Aretha meant to him. He responded (see video below): "I'm an odd choice to be on here. I know it may strike people as sort of bizarre, but I loved Aretha, like tens of millions of people. [Clears throat] Sorry, I'm getting a little choked up.

"My first image of Aretha was when I was a little kid. I came to America from Israel and I turned on a television set and there was a New York disc jockey named Murray The K, and he said, 'All right. Here she is: Aretha Franklin.' And this young, sort of with her back straight up came up and looked at the TV set and started singing, 'R-E-S-P-E-C-T, I just want a little respect.' And I wasn't just stunned by the lyrics… I never heard women talk like that. I go, 'What?' 'Give me some respect. R-E-S-P-E-C-T.' And then the voice, I'd never heard anybody like that. I'd never heard church music, Baptist music; I was just being introduced to rock and roll. And I was flabbergasted. And I kept listening. And the depth of her songs. Think '(You Make Me Feel Like) A Natural Woman' and so on and so forth.

"In the early '80s, when I was going out with Diana Ross, I suggested to Diana, 'Why don't you do a duet with Aretha?'" he continued. "And we were in her apartment in New York City, and instead of going through managers and all that, I just picked up the phone and was expecting to get brushed off by managers and the rest. Aretha got on the phone right away and I said — you know, that sort of stuttering thing, 'cause you're in the presence of greatness — 'How about… How about a duet with Diana Ross?' She [said], 'Sure. That would be a great idea.' I was stunned by her graciousness, the lack of ego, 'full-of-it' kind of thing, her kindness… Along the way, I learned more and more about how Aretha… of course, her father was a Baptist minister, she came out of Detroit. And when Diana took me back to Detroit to visit Motown and all that, we went through the neighborhoods, and I never knew this world; I didn't understand it. But Aretha didn't just stay in Detroit; she went down to the South and recorded with the classic Muscle Shoals rhythm section and Jerry Wexler and she started listening to all kinds of different music. THE [ROLLING] STONES loved her, for God's sake. She did 'Jumpin' Jack Flash' by them and killed it. She did 'Eleanor Rigby' by THE BEATLES.

"Here is a lesson for all of us. First of all, it's the saddest day. I love Aretha and always will. But all those little girls out who are watching 'America's Got Talent' and stuff like [that], shut up, get over yourself, sit down and listen to this music, because the new pop princesses have to understand that greatness once existed and her name was Aretha Franklin."

Franklin was 76 years old at the time of her death.

In 1987, Franklin became the first woman to be inducted into the Rock And Roll Hall Of Fame, and was later named the "Greatest Singer of All Time" by Rolling Stone.