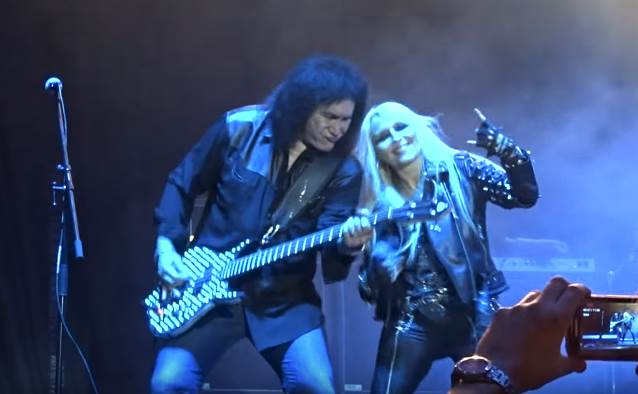 Doro Pesch joined KISS bassist/vocalist Gene Simmons on stage during his concert yesterday (Sunday, July 15) at Masters Of Rock festival in Vizovice, Czech Republic to perform the KISS classic "War Machine". Fan-filmed video footage of her appearance can be seen below.

Gene executive-produced Doro's second solo album, 1990's "Doro". She later said in an interview that the experience of working with Simmons "was a dream come true. Gene always showed me when you start a new record you start from zero again," she said. 'I was always a big fan of him and became a big fan of the person after working with him. So intelligent. I love that! It's was so great to watch him working with all the musicians. He was a great motivator, fantastic! Every time before I went into the studio, I was driving my car like maybe 20 minutes and I was very happy. Right before I went into the studio, my knees were shaking. 'Not again!' [Laughs] He made me very happy in so many ways. He really tried his best. I remember one song the mix wasn't coming out right. I was totally bummed out. I was really nervous. Gene said, 'Just go to your room and wait there.' I was in L.A. At 9 o'clock in the morning, the receptionist called me and said there was a gentleman here and left the tape for you. I couldn't believe it was nine o'clock, and I said, 'Okay.' I listened to it and Gene makes the call. It was the song 'Mirage' and it was so good. It moved me to tears when I wrote it. It came out so good. He definitely made sure the mix was perfect. He was there for us in so many ways. I think he was the best producer we ever had."