KISS bassist/vocalist Gene Simmons has joined forces with Nicholas Leone of Animazing Gallery at Grand Canal Shoppes at The Venetian Resort in Las Vegas for the debut of Gene Simmons ArtWorks October 14 through 16. The gallery showing will include a broad variety of artwork by Simmons — from sketches and drawings to small and large format paintings.

"Moving to the United States from Israel as a young boy, I didn't speak English," said Simmons. "I fell in love with comics and American television, and they not only helped me learn the language, but inspired creativity and a passion for drawing and painting."

Simmons, a serial entrepreneur who is recognized as much for his off-stage business and creative prowess as he is as for his bold onstage performances with KISS, has enjoyed success in many arenas. Well known as a branding expert, published author of numerous books, film and television star, public speaker, and founder of numerous businesses, Simmons has quietly held a secret passion for more than five decades — art.

"I started doodling and drawing when I was 8 years of age and as a teenager, I had hundreds of illustrations published in fanzines created by and for sci-fi and comic book enthusiasts," said Simmons. "With the KISS "End Of The Road' tour taking a pause during the pandemic, I had a chance to pull decades of my art out of storage and it reignited my passion for drawing and painting again."

Leone, CEO of Animazing Gallery in Las Vegas, had a chance to see a private showing of Simmons's artwork at Simmons's new Las Vegas residence.

"I always knew that Gene had many talents, but I had no idea that he was such an incredible artist. Getting to see samples of his artwork, ranging from his childhood illustrations to his current paintings, was eye opening. There is so much variety in his works," said Leone. "I asked if he would like to show, and possibly even sell some of his work, he humbly said 'why not', and here we are."

The Gene Simmons ArtWorks debut at Animazing Gallery will feature a private VIP event for art collectors and celebrities on October 14, followed by two days of public showings with personal appearances by Simmons from 3 p.m. to 5 p.m. and 7 p.m. and 9 p.m. on October 15 and 16.

"I have had no professional training; I just like to draw and paint. I don't always know where I'm going, and then all of a sudden, I'm on my way," said Simmons. "I have great respect and admiration for art and artists, and I'm excited that people like the work that has resulted from what I consider to be my lifelong hobby."

Simmons finds inspiration from such artists as Jackson Pollack, with many of his newest works embracing Pollack's action painting style with large format canvases on the floor, and Andy Warhol as a leading figure in the pop art movement.

In the mid-'70s, Simmons was an active members of the vibrant social scene in New York. He fondly remembers attending a party at renowned designer Halston's mansion on Park Avenue with his then-girlfriend Cher. Mingling among the event's who's who of artists, musicians, actors, dancers, and socialites, he met Warhol, who invited him to his studio.

"Wow. Spending a day with Andy was mind-blowing. Watching him paint — his passion, his vision — was so inspiring," said Simmons. "He was a giant among artists and a true pioneer." 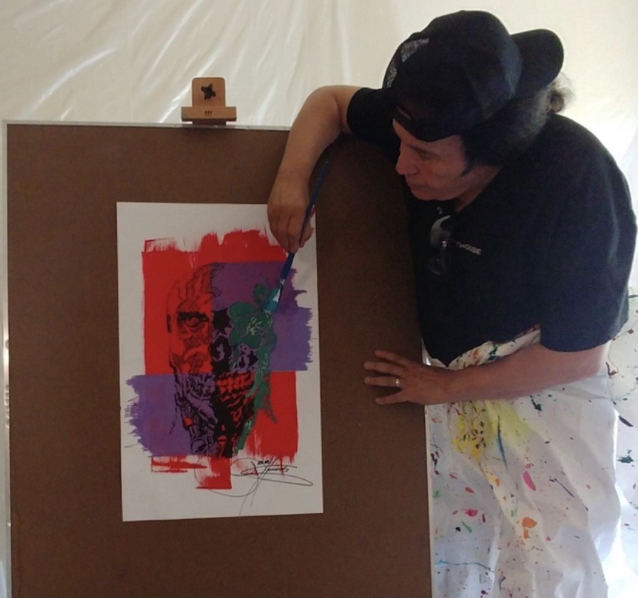