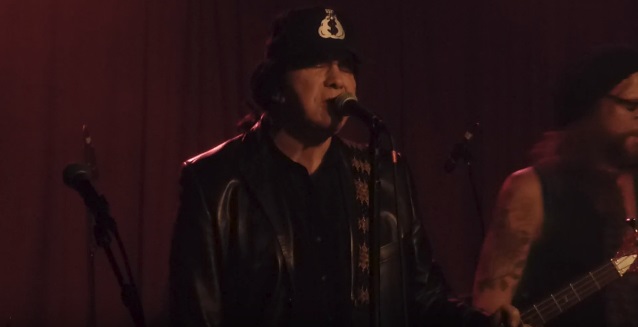 KISS bassist/vocalist Gene Simmons joined THEE ROCK N' ROLL RESIDENCY on stage last night (Tuesday, January 23) at Mercy Lounge in Nashville, Tennessee to perform the KISS classics "Deuce" and "Shout It Out Loud". Video footage of his appearance can be seen below. Check out photos at Rock Revolt Magazine.

THEE ROCK N' ROLL RESIDENCY is popular Nashville tribute that routinely hosts surprise appearances by Alice Cooper, Robin Zander (CHEAP TRICK) and Roger Glover (DEEP PURPLE). In addition, RESIDENCY founders Jeremy Asbrock and Phillip Shouse and their bandmates were hired by Simmons to be his band on a tour. Shouse told AL.com about how he connected with Simmons: "The Gene gig came from Ryan Cook. Ryan has known Gene, I think, since the late '90s — he was in a band called HAIR OF THE DOG that opened up some KISS shows. Ryan is also in with Doc McGhee and Scott McGhee, KISS's management, just been around them for a while. And Ryan's also in a band called THE BIG ROCK SHOW that has played on, I think, all the Kiss Kruises. And on the last Kiss Kruise, Gene came to him with the idea, it was only I think five solo shows at the time, which turned into way more than that now, 'Hey, I've got a handful of solo shows next year and can you put together a band for me?' And Ryan said, 'Yeah, I've got the guys right now.' So that was it."

Shouse said that Simmons is "absolutely hilarious" to work with. "When you see pictures of [the solo band], we are smiling the entire time, laughing and that goes onstage and offstage with him," he added. "And one of the reasons I think these solo shows are so successful is that people are seeing a whole new side of Gene, because he's that way to the crowd onstage. He's not in makeup. He's not in the dragon boots. He's not stomping around breathing fire. He's just Gene. And he's very casual, he's talking to the audience, he gets people onstage every show and they sing with him, they take selfies with him. It's a laugh a minute with him. He's like an old Jewish Catskills comedian with the one-liners and stuff."