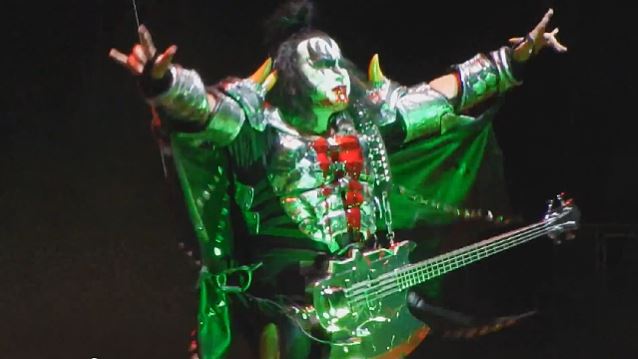 KISS bassist/vocalist Gene Simmons gave an interview to his son Nick for Esquire.com in which he was asked what he would say to young musicians and songwriters today trying to be successful in the wake of the meltdown of the music business in recent years

"Don't quit your day job is a good piece of advice," Gene began. "When I was coming up, it was not an insurmountable mountain. Once you had a record company on your side, they would fund you, and that also meant when you toured they would give you tour support. There was an entire industry to help the next BEATLES, [THE ROLLING] STONES, Prince, [Jimi] Hendrix, to prop them up and support them every step of the way. There are still record companies, and it does apply to pop, rap, and country to an extent. But for performers who are also songwriters — the creators — for rock music, for soul, for the blues — it's finally dead.

"I am so sad that the next 15-year-old kid in a garage someplace in Saint Paul, that plugs into his Marshall and wants to turn it up to ten, will not have anywhere near the same opportunity that I did. He will most likely, no matter what he does, fail miserably. There is no industry for that anymore. And who is the culprit? There's always the changing tide of interests — music taste changes with each generation. To blame that is silly. That was always the exciting part, after all: 'What's next?' But there's something else. The death of rock was not a natural death. Rock did not die of old age. It was murdered. And the real culprit is that kid's 15-year-old next-door neighbor, probably a friend of his. Maybe even one of the bandmates he's jamming with. The tragedy is that they seem to have no idea that they just killed their own opportunity — they killed the artists they would have loved. Some brilliance, somewhere, was going to be expressed, and now it won't, because it's that much harder to earn a living playing and writing songs. No one will pay you to do it.

"The masses do not recognize file-sharing and downloading as stealing because there's a copy left behind for you — it's not that copy that's the problem, it's the other one that someone received but didn't pay for. The problem is that nobody will pay you for the 10,000 hours you put in to create what you created. I can only imagine the frustration of all that work, and having no one value it enough to pay you for it.

"It's very sad for new bands. My heart goes out to them. They just don't have a chance. If you play guitar, it's almost impossible. You're better off not even learning how to play guitar or write songs, and just singing in the shower and auditioning for 'The X Factor'. And I'm not slamming 'The X Factor', or pop singers. But where's the next Bob Dylan? Where's the next BEATLES? Where are the songwriters? Where are the creators? Many of them now have to work behind the scenes, to prop up pop acts and write their stuff for them."

Simmons previously said that illegal music downloading was largely to blame for the music industry's decline and accused the music industry of not reacting fast enough to curb the problem of illegal file sharing.

Asked in an interview about the effect reality TV shows and digital downloads have had on new artists, Simmons said: "I think it's all good, because the record companies are in chaos, downloading is in chaos. The foxes have been led into the hen house, so people wonder why there's so few chickens. It's because you allowed your kids to go in there and steal the stuff for free, so record companies are dying and new bands don't have a chance. And new bands should get every chance in the world, and if it means 'The X Factor' or 'American Idol' or any other kind of [outlet], give them a chance. Few of them will survive, if any. But the old-fashioned model of a record company that cares about you and spends a lot of money to try to promote you, that's gone. It doesn't affect the big bands. It doesn't affect my living. We do a hundred shows, and there's more money there than some Third-World countries. But it does intrinsically hurt new bands. You know, the next Elvis [Presley], or the next BEATLES, is gonna have a very hard time starting out today."

Simmons also spoke to U.K.'s Metal Hammer magazine about how music piracy is destroying the music industry — and how fans will ultimately suffer for it.

"I still think [downloading] is a crime," he said. "The sad part is that the fans are the ones who are killing the thing they love: great music. For fuck's sake, you're not giving the next great band a chance. How much have we lost through illegal downloading? It's certainly millions. I don't think it's tens of millions, but it's certainly millions. But so much of what we do with the licensing and the merchandising and all that… we do alright!"

While speaking at the MIPCOM convention in Cannes, France in October 2010, Simmons said that harsher punishments must be given to those caught downloading music illegally.

"Make sure your brand is protected," Simmons insisted. "Make sure there are no incursions. Be litigious. Sue everybody. Take their homes, their cars. Don't let anybody cross that line."

The rocker continued by saying that lawsuits against illegal file-sharers should have happened sooner.

"The music industry was asleep at the wheel," he said. "And [they] didn't have the balls to sue every fresh-faced, freckle-faced college kid who downloaded material. And so now we're left with hundreds of thousands of people without jobs. There's no industry."