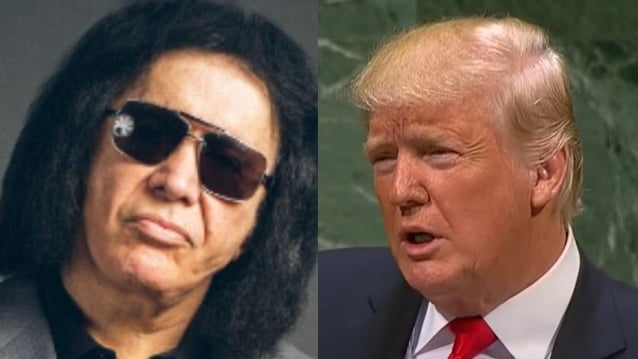 In a new interview with SPIN, KISS bassist/vocalist Gene Simmons spoke about former U.S. president Donald Trump, on whose "The Celebrity Apprentice" show he was once a contestant. "I know the previous [U.S.] president," he said. "I knew him before he entered politics. Look what that gentleman did to this country and the polarization — got all the cockroaches to rise to the top. Once upon a time, you were embarrassed to be publicly racist and out there with conspiracy theories. Now it's all out in the open because he allowed it."

Simmons went on to say that he and Trump "knew each other" before "The Celebrity Apprentice", "in clubs and all that. You have a different responsibility when you're just a citizen or an entrepreneur," he added. "You don't make policy. It doesn't affect life and death. When you get into a position of power, it does affect lives.

"I don't think he's a Republican or a Democrat," Gene said of Trump. "He's out for himself, any way you can get there. And in the last election, over 70 million people bought it hook, line and sinker.

"The current president [Joe Biden], I like the ethics and morality — not a charismatic guy, unfortunately. The first word I keep hearing from people, even friends is 'feeble.' I don't think he should run next time. So then who's around? There are no stars and invariably people vote for stars, not even what they believe in. The cult of personality. Americans are star obsessed: 'Kylie's got a new lip gloss? Fuck!'"

Simmons previously touched upon his feelings about the Trump presidency last August while speaking to Yahoo!'s Lyndsey Parker about the negative response he gets from some of his fans every time he shares his pro-vaccine stance on Twitter.

"It's been politicized," he said. "The gentleman who was in office, the former president [Donald Trump], I knew before the political world. It's the same person I knew before; the stripes of a tiger don't change. And the unfortunate thing is that… Look, we all lie to some extent, but what happened the last four years was beyond anything I ever thought imaginable from people who had lots of power — not just him, but the administration, everybody. And unfortunately, that disease — The Big Lie notwithstanding — has really infected a large portion of the population."

Asked to elaborate on his comment that Trump is "the same person" he knew when he was a contestant on Trump's "The Celebrity Apprentice" series, Gene said: "We were in a restaurant together, and I happened to be with an attractive young lady. And he walked up and said, 'Hey, Gene, you and I, we're exactly the same. We like the hot chicks.' That was a strange thing to say, but yeah, I guess that's true. But I think it's the same person. And maybe that was the appeal and continues to be. People are sick and tired of politically correct language and stuff.

"In a political dialogue, if somebody spews complete fiction and QAnon stuff, you wanna be able to have somebody who says, 'Are you out of your fucking mind? Did you just shit your diapers and forget to wipe it?'" Simmons added. "We're looking for that politician who just says instead of watching your language. Because the other side will spew garbage and lies and everything."

Back in 2019, Simmons said that Trump had "forever changed" politics. He added that "earth has never been in better shape" than it was in the summer of 2019. "I know — climate change and a polarized political thing — but there are no more world wars," he stated at the time. "I mean, imagine what London looked like 60 years ago. This is the best of times. Unemployment in the United States is the lowest it's been in 50 years — 5-0. When I rang the bell at the New York Stock Exchange at their behest, the Dow [Jones Industrial Average] was about 8,000. It's almost 27,000 today. More people are working. More people are making more money. Unions are more powerful."

In the past, Gene had defended Trump's occasional off-color remarks and frequently outrageous statements, saying: "I don't know anybody here who hasn't said stupid things publicly or privately. You've said potty words and so have I. So I'm gonna give the guy who was duly elected a chance to show us what he can do, and then I'll judge his legacy."

Simmons said that he "didn't necessarily vote for Trump or [Hillary] Clinton" in the 2016 presidential election, adding that "it's really nobody's damn business" whom he voted for. "I think you'd be surprised by my choice — but he's President Trump, because even if you don't like the man, you must respect the office of the presidency and the will of the Electoral College," he said.

In 2017, Simmons confirmed that KISS was invited to perform at Trump's inauguration but turned it down because it was "not a good idea."