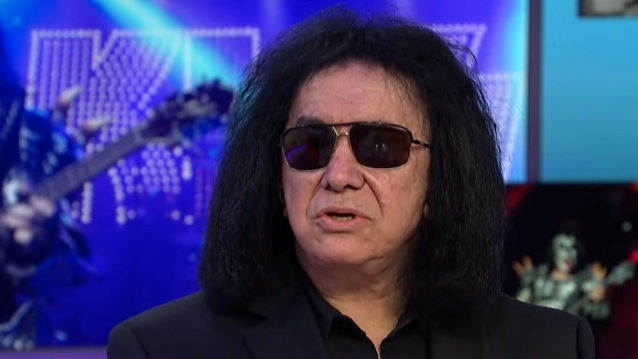 KISS bassist/vocalist Gene Simmons — who is a former contestant on Donald Trump's "The Celebrity Apprentice" series — says that he wasn't entirely surprised to see the billionaire real estate mogul become the 45th president of the United States.

"Quite honestly, I didn't think of the presidency, but it takes a certain personality, certain DNA to go anywhere and do anything," Gene said during an appearance on "Good Morning Britain" (see video below). "If you really think about it, Arnold Schwarzenegger, who's from Austria, the fact that he became — with a difficult-sounding name — the biggest bodybuilder, the biggest star on earth in movies, although he couldn't pronounce English words well, and then the governor of California, the fifth largest economy on planet Earth — ahead of the U.K. Could have been president, except that he wasn't born in America.

"Politics has forever changed. Whether you like it or not, this president has changed it," Simmons continued.

"I understand this thing," Gene said of Trump's need to punch back against opponents. "It's a New York streetfighter. If you say, 'What are you looking at? You're looking at me?' Politics are over. Now this guy is just saying, 'I don't care what my guys are saying. Did you just say something bad about me? I'm coming after you.'"

Asked for his opinion on the state of the world in 2019, Simmons said: "Look, as a history buff and as a former sixth-grade teacher in Spanish Harlem, it's never been better. Don't kid yourself. My mother was a concentration camp survivor in World War II. She was 14 years of age. She, unfortunately, just passed on during Christmas.

"Earth has never been in better shape," Gene added. "I know — climate change and a polarized political thing — but there are no more world wars. I mean, imagine what London looked like 60 years ago. This is the best of times. Unemployment in the United States is the lowest it's been in 50 years — 5-0. When I rang the bell at the New York Stock Exchange at their behest, the Dow [Jones Industrial Average] was about 8,000. It's almost 27,000 today. More people are working. More people are making more money. Unions are more powerful."

Simmons predicted in the months following the last U.S. presidential election that the Dow Jones Industrial Average would plow past 23,000 as optimism over corporate earnings turbocharged.

In the past, Gene has defended Trump's occasional off-color remarks and frequently outrageous statements, saying: "I don't know anybody here who hasn't said stupid things publicly or privately. You've said potty words and so have I. So I'm gonna give the guy who was duly elected a chance to show us what he can do, and then I'll judge his legacy."

Simmons said that he "didn't necessarily vote for President Trump or candidate [Hillary] Clinton" in the 2016 presidential election, adding that "it's really nobody's damn business" whom he voted for. "I think you'd be surprised by my choice — but he's President Trump, because even if you don't like the man, you must respect the office of the presidency and the will of the Electoral College," he said.

In 2017, Simmons confirmed that KISS was inivited to perform at Trump's inauguration but turned it down because it was "not a good idea."