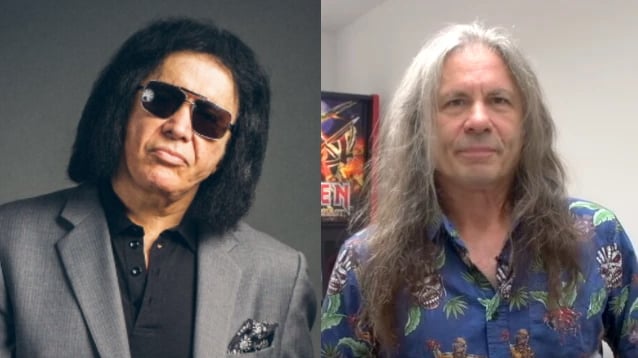 KISS bassist/vocalist Gene Simmons says it is "disgusting" that IRON MAIDEN has yet to be inducted into the Rock And Roll Hall Of Fame.

IRON MAIDEN was on the ballot for Rock Hall induction this year, but failed to receive enough votes to make the class of 2021.

Having been eligible for induction for a decade and a half, IRON MAIDEN is one of the biggest bands on the planet. Since the arrival of its self-titled debut album, MAIDEN has released a further 15 full-length studio records, and sold over 100 million copies.

After BLABBERMOUTH.NET tweeted on Wednesday that MAIDEN was snubbed by Rock Hall this year, Gene shared the tweet and included the following comment: "RR Hall of Fame is a sham not to include MAIDEN. Disgusting!"

Simmons is not the only member of KISS to argue that IRON MAIDEN deserves to be in the Rock And Roll Hall Of Fame. Last month, Paul Stanley tweeted: "Regardless of whether it matters to them, MAIDEN not being in the @rockhall of Fame is INSANITY. Regardless of who is writing in or not, the Committee must induct them. They have helped spawn an entire genre of music. What else do you need to do?? @IronMaiden"

RR Hall of Fame is a sham not to include Maiden. Disgusting! https://t.co/WbNYr42lBI

Regardless of whether it matters to them, Maiden not being in the @rockhall of Fame is INSANITY. Regardless of who is writing in or not, the Committee must induct them. They have helped spawn an entire genre of music. What else do you need to do?? @IronMaidenhttps://t.co/gGKmYYpbWE