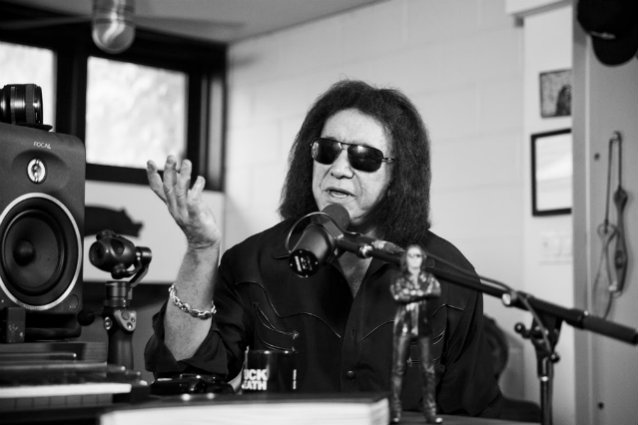 Gene Simmons says that "it's too early" to judge Donald Trump's presidency.

The KISS bassist/vocalist — who is a former contestant on Trump's "The Celebrity Apprentice" series — made his comments during an appearance on "The Strombo Show", a music-oriented free-form radio talk program hosted by Canadian television and radio personality George Stroumboulopoulos.

Asked if he thinks the billionaire real estate mogul has been a good president so far, Gene said (see video below): "Well, it's too early. You know, when you were a little baby and you kept falling on your face, I'm not gonna judge you then.

"Do I think he said a lot of stupid things? Oh, yeah," he continued. "But I know the man, by the way — we hung and all that stuff. What you see is what you get. He says stupid things, and so do you, and so [do] I. I'm not validating it, but… There's not a human being that walks on the face of the planet that privately hasn't made racist or anti-Semitic or anti-women jokes, or anti-Irish jokes. Privately, everybody does it. He is a Tourette's president who will say whatever he wants, and he doesn't give a fuck if you approve of him, and he's doing the job for one dollar. I like that."

Although Simmons agrees that "what you say can be hurtful," he believes that people will ultimately be judged by what they do. "At the end of the day, politics intrinsically is about two things: one, keep us safe, and two, give me an opportunity to feed my family," he said. "And the rest is, 'Eh.' I think if you go across everywhere else, anywhere you go in the world, those are the two items people are concerned with most."

Gene went on to defend Trump's occasional off-color remarks and frequently outrageous statements, saying: "I don't know anybody here who hasn't said stupid things publicly or privately, and if they get outed, if you get caught on tape, from Mel Gibson to everyone… I know Mel very well, and I'm Jewish myself, and he said some stupid things, racist things, anti-Semitic things when he was, you know, high or drunk or whatever. But I know the guy, I know that he gave a twenty-million dollar check to start mending kids privately and never talked about it, I know the guy that goes out of his way to help refugees and stuff like that and doesn't advertise it. It's your deeds, not what you say. You've said potty words and so have I. So I'm gonna give the guy who was duly elected a chance to show us what he can do, and then I'll judge his legacy."

Earlier in the week, Simmons confirmed that KISS was inivited to perform at Trump's inauguration but turned it down because it was "not a good idea."

Simmons said that he "didn't necessarily vote for President Trump or candidate Clinton" in last year's presidential election, adding that "it's really nobody's damn business" whom he voted for. "I think you'd be surprised by my choice — but he's President Trump, because even if you don't like the man, you must respect the office of the presidency and the will of the Electoral College," he said.