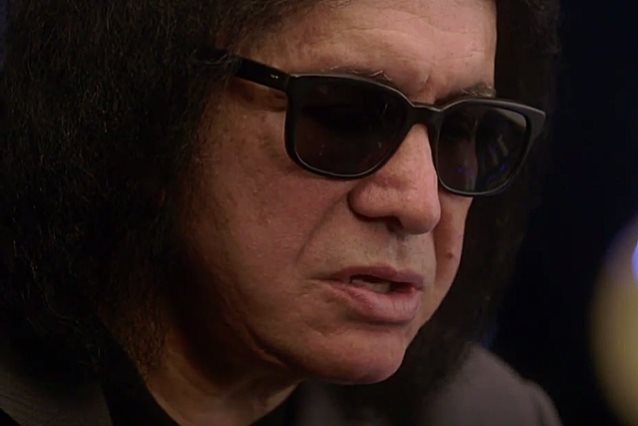 Gene Simmons says that the ongoing issues around artist royalty payments involving streaming music services like Spotify can be resolved through "legislation."

With streaming services dominating the way listeners consume music, artist royalties have been a major topic of discussion.

Artists and labels have in the past complained about minuscule revenue from streaming sites when compared to downloads or physical sales.

While promoting his new box set of previously unreleased solo material, "The Vault", this past Wednesday (September 13) on Fox Business, Simmons was asked if he thinks streaming services hurt artists when it comes to music ownership and earnings. He responded (see video below): "It's a disaster. It's a disaster, because the fans have decided, and they've been trained to not pay for music."

He continued: "Imagine a supermarket. Farmers have worked all their lives to grow the fruit, and the trucks and the unions that bring it to the stores, and the beautiful stores and the people that work there. Imagine walking in there and being able to walk out with anything you want without paying for it. How long is the farmer gonna stay in business? How long is retail gonna stay in business? So everything is dying because fans have trained themselves not to pay for the music."

Gene went on to say he believes "legislation is the answer" when it comes to ensuring that as the companies behind these digital services swell into multibillion-dollar enterprises, it doesn't come at the cost of the artists and their collaborators who put the work into making the music.

"Look, my daughter, Sophie Simmons, had a ten-million-viewed single two years ago — ten million!" he said. "She made two hundred and fourteen bucks. Spotify is taking all the money. The bands are taking, the acts are taking a small percentage of one penny per download, which is a crime."

Spotify says it has more than 140 million active users, and more than 60 million paying subscribers across 61 markets.

Because record labels own the music, they force Spotify to pay 70 percent or more of its revenue to them for royalties.

Former TALKING HEADS frontman David Byrne in 2015 called for more transparency from major labels and streaming services over the fees which musicians receive when their music is played on platforms like Spotify and Apple Music.