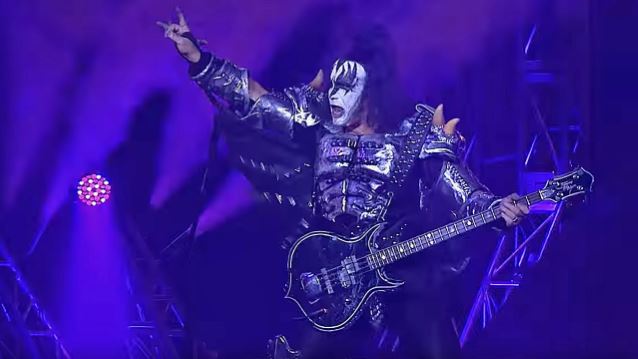 According to The Hollywood Reporter, KISS frontman Gene Simmonsfiled an application last Friday (June 9) for a trademark on the so-called "devil's horns" hand gesture.

Simmons claims in the filing that the hand gesture was first used in commerce November 14, 1974 — a date that appears to correspond with KISS's "Hotter Than Hell" tour.

Back in 2004, Steve Appleford of LA CityBEAT conducted a "survey" of heavy metal musicians regarding the origins of the "devil's horns" hand sign — the horned hand, with index finger and pinkie raised proudly as the sign of the beast, which is being used as the "international greeting to heavy metal ecstasy."

"Gene Simmons wrote in his 2002 autobiography that it was his accidental invention, the inadvertent gesture of a great man, repeated at concerts and picked up by fans," Appleford said. "Not likely. Former BLACK SABBATH shouter Ronnie James Dio also takes the credit, first raising the horns before joining the band in 1978. And he's expressed alarm over the image of Britney Spears fans raising the sign at concerts by the dancing diva of lip-synched pop."

When Appleford asked Lemmy about the source of the "devil's horns" hand sign, noting the casual claims of Gene Simmons, Lemmy replied, "Well, he would, wouldn't he? He is so eeevilll. Come on, gimme a fucking break."

In a separate interview, METALLICA singer-guitarist James Hetfield answered: "I think Dio." Then he went on, with a smile: "I think Spider-Man originally. It's also 'I love you' in sign language. I don't know, I think it's 'Two more songs!' — you know."