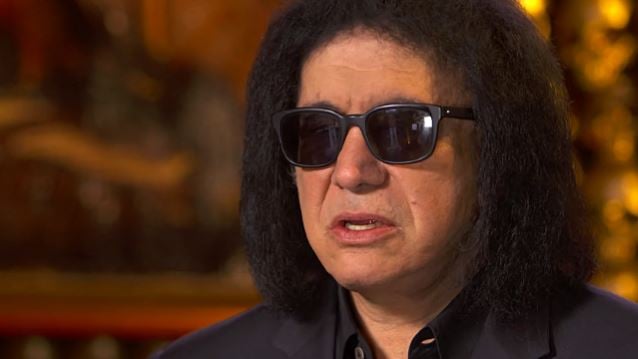 Talib Kweli has fired back at Gene Simmons for the KISS bassist/vocalist's prediction that "rap will die." The rapper, who has more than one million followers on Twitter, posted a clip of Simmons's recent interview with Rolling Stone and asked his fans: "Would it be unfair of me to say I'm looking forward to the death @genesimmons or nah?" He added: "Chuck Berry shits on KISS."

The Brooklyn-born artist and activist added: "Hip-hop has saved countless lives. How dare he wish it dead. So would it be fair to wish him dead, or nah?"

"I had no problem w KISS til Simmons bitch ass opened his mouth about rap," he wrote. "Let's go lyric for lyric tho. Me vs KISS.

"Rock has also saved countless lives. No one is dissing rock. KISS ain't rock. It's marketing. Try to keep up."

During a chat with Rolling Stone to commemorate the 40th anniversary of KISS's groundbreaking 1976 album "Destroyer", Gene couldn't help but talk about the current state of music, explaining, "Rap will die. Next year, ten years from now, at some point, and then something else will come along. And all that is good and healthy… I am looking forward to the death of rap. I'm looking forward to music coming back to lyrics and melody, instead of just talking. A song, as far as I'm concerned, is by definition lyric and melody... or just melody."

Simmons, who previously spoke out about his frustration with rap and hip-hop artists being inducted into the Rock And Roll Hall Of Fame, later clarified his words by tweeting: "Apparently pointing out that everything is cyclical — even music — is 'controversial.' People are very easily offended."

But Kweli wasn't impressed with Simmons's answer, writing: "Pointing out everything is 'cyclical' is different than 'looking forward' to things dying. Do better Gene." He then posted lyrics from KRS-ONE's "Hip Hop Lives".

Would it be unfair of me to say I'm looking forward to the death @genesimmons or nah? Chuck Berry shits on Kiss. pic.twitter.com/ZNGkeAjaGT

Apparently pointing out that everything is cyclical - even music - is "controversial". People are very easily offended.

Pointing out everything is "cyclical" is different than "looking forward" to things dying. Do better Gene. https://t.co/7OJHZLHPdf