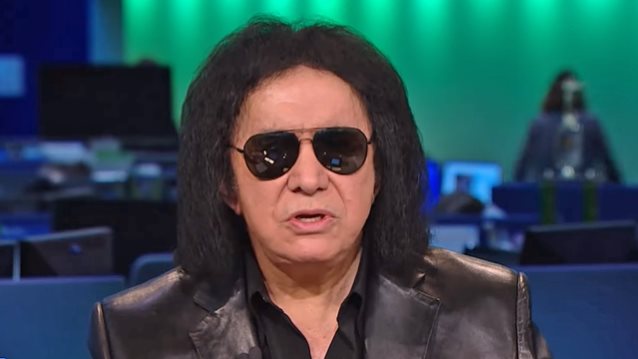 KISS bassist/vocalist Gene Simmons has once again defended his controversial "rock is dead" comment, blaming the technology and fans for the current state of affairs.

Simmons told Esquire magazine in September 2014 — in an interview conducted by his son Nick — that "rock did not die of old age. It was murdered. Some brilliance, somewhere, was going to be expressed and now it won't because it's that much harder to earn a living playing and writing songs. No one will pay you to do it."

Simmons went on to elaborate that as a result of filesharing and other issues, record label support for rock music was not available like it was when KISS was coming up, concluding, "It's finally dead. Rock is finally dead."

In a brand new interview with Scott of WWL radio, Simmons stood by his comments, explaining (hear audio below): "Rock is dead. It's because of the Internet and Napster and all that stuff. Once you download and fileshare, then you're not making it possible for a new band to be able to do this full time.

"There's every bit as much talent out there as there [was] when we first started, but the new bands have to live in their mother's basement because they can't afford to do this full time, because people are just filesharing and downloading," he continued. "And that's their prerogative — we allowed it and we haven't sued everybody's pants off for doing that. So that's everybody's fault — the record company's fault."

Simmons went on to say: "Try this: 1958 until 1988 is thirty years, right? During that time, with record companies — the big, bad corporate entities called record companies… Well, without them, there wouldn't have been Elvis [Presley], THE BEATLES, THE [ROLLING] STONES, Jimi Hendrix… you know, just a thousand classic bands. Even in disco, you got Madonna, you had Prince, U2, AC/DC, us maybe and a few others. And even in pop, you had Michael Jackson, JACKSON 5… I mean, it's just endless. From 1988 until today, who is the new BEATLES? Name five bands that stand up to THE STONES, THE BEATLES, Elvis, Jimi Hendrix and so on."

After Scoot brings up the American rock band PANIC! AT THE DISCO as an example of a very popular current artist, Simmons responded: "You're missing the point. If you walk down the street and the first person you meet, especially somebody forty, fifty years old, and you say, 'PANIC! AT THE DISCO,' they run. They have no idea what the hell you're talking about."

He continued: "A superstar and an iconic band pervades all and everyone knows what it is.

"There are many popular bands that are popular now. When I was growing up, it was Leif Garrett and THE PARTRIDGE FAMILY and THE MONKEES and the thousand bands that were popular for a few years. That's not what makes iconic."

Despite his pessimistic view of the current rock scene, Simmons wished all the new artists luck, but added: "It's unfortunate that new bands don't have the support of record [companies] to support them with posters and tour support and all that stuff."

A number of hard rock and heavy metal musicians have weighed in on the topic in a variety of interviews over the last couple of years, with some digging a little deeper into Simmons's full remarks and others just glossing over the headline. SLIPKNOT and STONE SOUR singer Corey Taylor told a radio station in October 2014: "Nothing against Gene. I understand what he was trying to say. His way of making albums and making music and getting things out there is dead. But you just kind of have to roll with the technology, you have to rise with the times, you have to learn to use those to your advantage. You can't just sit back and just kind of do album-tour-album-tour — there's so much that goes into it now."