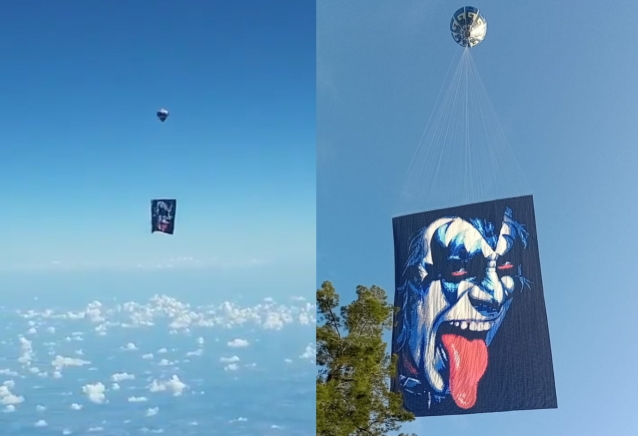 GENE SIMMONS 'Tribute Balloon' Filmed From Cockpit Of Jet In Brazil 20,000 Feet Up In The Air

A "tribute" balloon to KISS bassist/vocalist Gene Simmons was filmed from the cockpit of a jet in Brazil 20,000 feet up in the air.

The 36-second clip was originally uploaded by a Brazilian flight crew member on April 29 and was subsequently shared by Scott Bateman, a C130, BN2, 747 and A350 pilot who is also the co-host of "The Layover" on YouTube and owner of 9-Line Media. Bateman wrote in an accompanying message: "These are tribute balloons that are regularly seen in #Brazil and across S America. They pose a real risk to #aircraft and #WePilots need to keep a sharp lookout. I recently avoided one over #SaoPaulo area at 20k. @grahamsturgeon has also seen one. Why ?"

Simmons himself later shared the video, tweeting: "I would recommend you watch this video from the cockpit of a jet 20,000 feet up in the air. You won't believe what they see."

Loose balloons reportedly pose a significant risk to aviation. Just last month, retired air traffic controller and an NTSB aviation accident investigator Barbara Zimmermann told Palm Coast Observer: "They can be extremely difficult to spot from the cockpit, and it can be challenging for a pilot to avoid these free-floating objects that can change direction in any instant. Balloons can be ingested into the aircraft's engine, restrict airflow and cause the plane to lose power."

Zimmermann cited several balloon-related crashes or near-crashes, including a 1993 incident when a bundle of balloons caused a private twin engine plane to crash in California; a January 2018 episode when a bundle of balloons almost caused a crash with a business jet taking off from London; and a November 2021 occurrence when a Boeing 737 reported a near-miss with balloons at 7,000 feet in England.

KISS kicked off the South American leg of its "End Of The Road" farewell tour on April 19 in Santiago, Chile and has played three Brazilian shows so far: April 26 in Porto Alegre, April 28 in Curitiba and April 30 in São Paulo. The band is scheduled to perform tonight (Sunday, May 1) in Ribeirão Preto, Brazil.

Last October, KISS frontman Paul Stanley said that the final concert of the "End Of The Road" tour will likely happen by early 2023.

I would recommend you watch this video from the cockpit of a jet 20,000 feet up in the air. You won’t believe what they see. https://t.co/cAsgi1HWRU