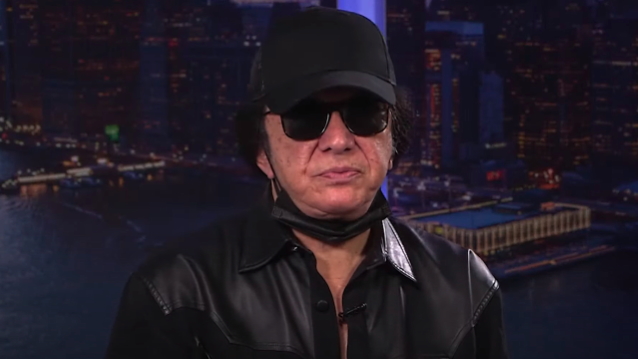 GENE SIMMONS: 'Who Killed The Music Business? The Fans Did'

In a new interview with US Weekly, KISS bassist/vocalist Gene Simmons once again spoke about the decline of the music industry as consumers value access over ownership and experiences over assets.

"By and large, new artists will never have the chance that we got, because record companies would give us millions of dollars — once we got successful — as an advance, non-recoupable, with a royalty system and all that," he said (as transcribed by BLABBERMOUTH.NET). "And so we didn't have to work day jobs. Now if you're a new band, you can't make a living because all the freckle-faced college kids — who, by the way, hate me — because what I'm saying is it's robbery. You're robbing by downloading and filesharing that music. It doesn't affect me; our band came before, when it was a real business. But the new artists, you're breaking my heart. It's like new babies being born without being able to have food. You're taking food from their mouths so they have to go work for a living and not have enough time for their art.

"Who killed the music business? The fans did," he continued. "Not a foreign power, not aliens; the fans killed it. And who do I blame? The record companies for not suing that first putz who dared break into the henhouse and steal some eggs and a chicken for free. As soon as you let that first fox into that henhouse to take some eggs without paying for it, the rest of the foxes come along. Likewise, cockroaches — you allow one into the kitchen, you squash that first one, the rest of 'em are gonna go, 'Uh-oh, we've gotta watch out.'

"So, Pandora's box has been opened. There are hundreds of millions of fans around the world that are trained [in their minds] not to pay for music. So what does that do for new bands? It kills them. When you take away the value of something, it becomes by definition worthless.

"Imagine being a farmer, and you sell eggs and chickens — that's what you do. And that first little cute fox comes in and steals an egg. And the farmer is gonna try to shoot the fox, 'cause, 'Hey, you're stealing my living.' And the wife says, 'Don't [shoot the fox]. It's so cute.' That cute little fox takes the egg back to where all the foxes are: 'Hey, we've got a sucker over here. Let's go get some chickens and eggs.' Before you know it, there are no chickens; no eggs' the farmer's out of business; the trucks that drove the farmer's stuff to market are out of business 'cause they don't have stuff; the supermarkets that sold the stuff are out of business. Everybody's out of business because that first putz, that first little hole in the Titanic sank the whole ship."

This is far from the first time Gene has painted a bleak picture of the state of rock music. Back in 2014, he told Esquire magazine that "rock did not die of old age. It was murdered. Some brilliance, somewhere, was going to be expressed and now it won't because it's that much harder to earn a living playing and writing songs. No one will pay you to do it."