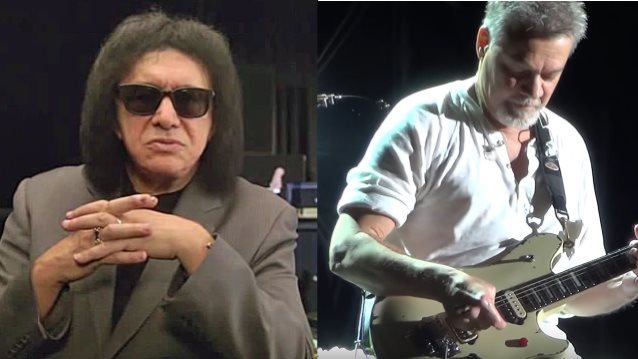 Gene reportedly sings and plays bass on the material, which was laid down in 1977 at the Village Recorders studio in Los Angeles during the writing sessions for KISS's "Love Gun" album.

Gene, Eddie and Alex cut "Christine Sixteen" and "Got Love For Sale", both of which appeared on "Love Gun", and "Tunnel Of Love", a tune Simmons would re-record for his 1978 eponymous solo album.

"They did me a favor," Simmons told Rolling Stone in a 2016 interview. "We recorded three songs I had written. I was in Los Angeles between tours, and I called Alex and Ed: 'Listen, I got three songs. I'm going in at 2 a.m. Do you want to come down and help me?' Usually, I play the guitars and the drums to the extent I can and put down all the parts. But I wanted to do three songs instead of one. So we did 'Christine Sixteen', and I put the keyboards on, everything else. And Ed did the solo to the rhythm guitar, bass, and Alex was on drums."

"When I brought the songs to [the rest of KISS], unfortunately for Ace [Frehley, original KISS guitarist], I forced him to learn Eddie's solo note for note," Simmons continued. "He wasn't fond of it, but in retrospect, it's the right solo. It's not the same old blues thing."

More information on "The Vault" will be made available at www.genesimmonsvault.com.

Simmons has released two solo albums and also written for and with other artists, including Bob Dylan and Donna Summer.

"I've always written 'outside' stuff," he explained in response to a fan question on his official web site back in 2009. "But KISS is KISS. And that means the outside stuff winds up on solo albums, or I keep it in the drawer."

Simmons's sophomore solo album, "Asshole", sold around 13,000 copies in the United States in its first week of release back in 2004 to land at position No. 86 on The Billboard 200 chart. Like Gene's 1978 self-titled solo album, "Asshole" featured a number of outside songwriting contributions and guest appearances. Bob Dylan and Gene co-wrote the album's "Waiting For The Morning Light". Frank Zappa and Gene share co-writing credit on "Black Tongue" and the Zappa Family, Dweezil, Ahmet, Moon, Gail and Frank Zappa himself sing and play guitar on the song.