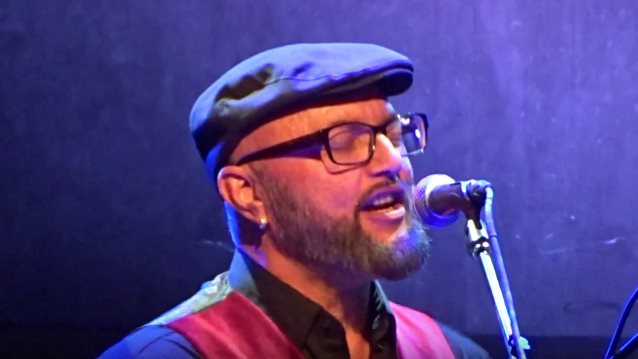 Ex-QUEENSRŸCHE singer Geoff Tate spoke to the Chicago Tribune about his recent encounter with his former bandmates at Rock Fest Barcelona in Spain where the band performed on one stage and he performed with rock opera project AVANTASIA on another stage.

"We actually had kind words to say to each other, hugs and handshakes," Tate said.

"I don't know if that's the beginning of the healing process. It's too early to tell. I can just say it was nice seeing everybody. It was good to actually be able to talk to each other."

Earlier in the month, Tate told the "92 Minutes Of Hair With Mel" show on the Las Vegas, Nevada radio station KOMP 92.3 that watching QUEENSRŸCHE at Rock Fest Barcelona marked the first time he had seen the band play without him. He said: "I'd never heard their new singer [Todd La Torre], but I watched them play and they were great, and that singer is fantastic. He's amazing! He sounds just like me. It was eerie and weird. And then I met all the guys afterwards and shook hands with them, we hugged and said hello, and it was a really nice little reunion, you know, get-together."

Tate told Metal Wani back in May that the only way he could ever play with his former colleagues in QUEENSRŸCHE again was if "everybody [got] in the same room and actually confront[ed] all the things that were said and all the things that happened. And that is a really big commitment, because there was some really negative stuff that went down. And I don't know if everybody has that kind of want to go through that. [Laughs] The money would be the big driving force that would get everybody together, and I don't need the money, so I'm not really motivated to sit in a room and listen to what I've had to listen to [laughs] with everybody. But, you know, again, never say never."