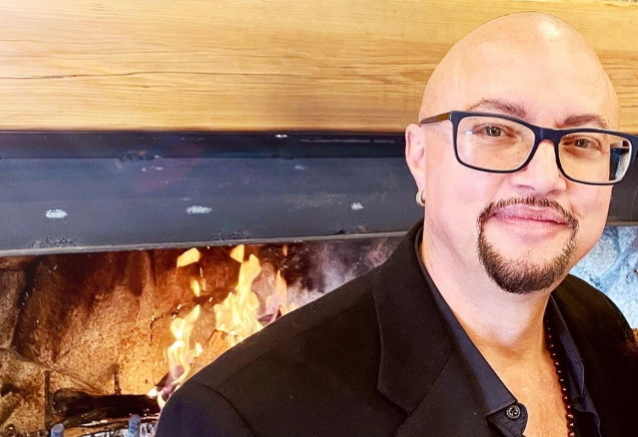 Ex-QUEENSRŸCHE singer Geoff Tate spoke to Thorn Of Rock about his 2017 chance encounter with his former bandmates at a festival in Spain. Asked if watching his previous band perform with a new singer was akin to seeing an ex-wife with a new man for the first time, Tate laughed and said (as transcribed by BLABBERMOUTH.NET): "Yeah, kind of like that. [Laughs] I was actually at the show performing. I played with a band called AVANTASIA. So, AVANTASIA was headlining the Barcelona festival. And I went out early that day to the venue, 'cause I wanted to see QUEENSRŸCHE play. I hadn't seen them perform before without me. I think they were playing at, like, three o'clock in the afternoon, and there was hardly anybody there, but it was really interesting to see them play. And their singer [Todd La Torre], God, he sounds just like me. It was very odd. But I'm glad I [saw them]. I got to say hi to all the guys — except Scott [Rockenfield, drums]; he wasn't in the band anymore, I guess, at that time. But I got to say hi to Michael [Wilton, guitar] and Eddie [Jackson, bass] at least." [Fan-filmed video of Geoff watching QUEENSRŸCHE perform from the side of the stage can be seen below.]

Todd recounted his meeting with Geoff during an August 2017 appearance on SiriusXM's "Trunk Nation With Eddie Trunk". He said: "[Geoff] was guest-performing with AVANTASIA. And I went to the [QUEENSRŸCHE] tour bus and I came back, and I noticed... It's a big backstage with all the drum risers there — you know how it is; they're rolling them in and out — and I saw him talking with Eddie. And so I thought, 'Oh, that's interesting,' because, you know, with everything that went down, you never know how's that dynamic gonna be if we're ever in close proximity together."

According to Todd, the guys in QUEENSRŸCHE "didn't know" that Geoff was going to be at the same event until "somebody had messaged me and said, 'Hey, did you realize that there's a likelihood that you're gonna run into Geoff Tate there?' So that was when I said to the guys, 'Hey, just an F.Y.I.: he is performing with this band, so we're probably gonna be in the same area. Just a heads up. I'm sure it'll be cool, hopefully.' And everyone was, like, 'Okay. Whatever.''

La Torre continued: "And so I saw him chatting with Eddie, and it was cool. And then we were going on, I don't know, maybe an hour, an hour and a half from that incident. And so our show started. He was stage left, so near Michael Wilton's side of the stage, and he stood there, I would imagine, it seemed like probably the whole show. I knew he was standing there watching. So afterward, the show was done and he came over, I exited the stage and he came over and kind of tapped me on the shoulder or something and said, 'Hey,' and put his hand out and said, 'We never really had a chance to meet, really.' And I said, 'Sure.' I shook his hand and he said, 'With everything that kind of went down…', and I said, 'Of course.' And he said, 'This is the first time I'ver heard you sing.' And I didn't know if he meant at all or, obviously, live. And so I said, 'Okay.' He said, he goes, 'Wow! You're amazing!' And I said, 'Well, thank you very much. That's nice to hear.' And I was complimentary of him. I said, 'Listen, for what it's worth, I have defended you. I know that sometimes the media and people can try to stir the pot, and for what it's worth, as far I'm concerned, you've done it all. I was kind of just expressing the sentiment, like, 'You don't have anything to prove in my book. You've already done it all.' And I said, 'I'm doing the best job that I know how.' I told him that the 'Empire' material is actually more difficult for me. I expressed to him that he's always had a very smooth control over those vocal parts, and that's more difficult for me. Now the older stuff is easier for me.'

At some point during Todd's conversation with Geoff, "Michael came over and [Tate] shook his hand and said, 'Man, the set was tight. It sounded great,'" La Torre recalled. 'So that was… We joked around and I think at the very end, I had said, 'It would be funny, since everybody is always trying to start shit between us,' I said, 'if we took a selfie together, that would be kind of hilarious, pointing at each other.' And we did, but I never posted the photograph, 'cause I thought, 'I don't need to stir any waters.' But we had a little laugh, and there was no craziness, nothing weird. So, at the end of the day, as an outsider, I thought, 'You know, this is good that we can be in the same area, and there's no craziness or anything.''

Todd said that he he appreciated Geoff's encouraging words, especially considering how awkward it must have been for Tate to witness his former band performing their classic songs with a replacement singer.

"Of course, there are some people that are divided still, the purist type of mentality, and I've heard it all: I suck and I don't sound anything like that, blah blah blah. And so I thought, what better testimony that the band is on the right track, the vocals sound worthy than to hear that from the original singer…" La Tore said. "I don't like to use the word 'endorsement,' but certainly acknowledging that the vocals sound great, the band sounds tight. I just thought, 'Wow, that's kind of an interesting perspective,' if you look at it from what I'm mentioning, where some people say, 'Oh, it doesn't sound right,' or this or that. And you say, 'Well, the original singer seems to think that it sounds excellent,' and what better testimony do you need?"

Asked by Trunk if it "played" on him at all during QUEENSRŸCHE's performance at Rock Fest Barcelona that Tate was standing on the side of the stage watching him sing, La Torre said: "No. No. I mean, at first it's, like, 'Okay, he's standing there watching.' I guess there's a moment of, 'Well, that's really kind of surreal: 'Here's the original singer watching the band perform and I'm singing those songs.' So for a split second [I thought about it], but to be completely honest, I don't care who's on the side of the stage, I just am always gonna just do what I do and not let that affect my psychology of 'How am I gonna perform?' or 'Do I feel intimidated?' I just threw it right out the window and said, 'Okay, there's some people on the side of the stage, like there typically is. Just do your show.' I don't ever get nervous before a show. I mean, if my voice doesn't feel good, then sometimes [I think], 'I hope tonight's gonna be good.'"

Todd continued: "In fact, [Geoff] had asked me [after our performance], he said, 'How do you think the show went?' And I said, 'Do you mean for the band or for me?' And I can't remember — I think he might have said 'both.' And I said, 'As far as the band goes, I think we did well.' I said, 'As far as my performance, I can blow that away,' because I can. I said, 'We've done all these shows — another six in a row, and then four in a row.' I said, 'I've only had one day off, and then another day off. So I'm a little tired, but I got through it.' He was still, again, nice. He said to me, 'I pity what you have to sing.' And I thought, 'I don't know what that means.' Because those records were so amazing and it's not easy material by any means. And I just said to him, 'You know what? Yeah, I can hit the high notes and do this and do that,' I said, 'but you know what you have that I don't have?' I said, 'You created a sound and style of singing — in my opinion — that is iconic. And so you've done it all.' I said, 'You've forgotten more, probably, than most singers would ever really achieve on that kind of a professional level.'"

La Torre added: "So it was a nice, complimentary exchange. We shook each other's hands, we did a little selfie. He was nice to me, I was nice to him. So, should there ever be another time where we're in the same area, it's nice to know that he could walk up to me or I could walk up to him, or whatever, and it's fine. So that was good."

La Torre joined QUEENSRŸCHE as the replacement for Tate, who was the band's original lead vocalist, after the latter was fired in 2012. A two-year legal battle followed where Tate sued for the QUEENSRŸCHE name, only for Wilton, Rockenfield and Jackson to respond with a countersuit. They eventually settled the dispute, with Wilton, Rockenfield and Jackson continuing as QUEENSRŸCHE, and Tate now having the sole right to perform the albums "Operation: Mindcrime" and "Operation: Mindcrime II" in their entirety live.