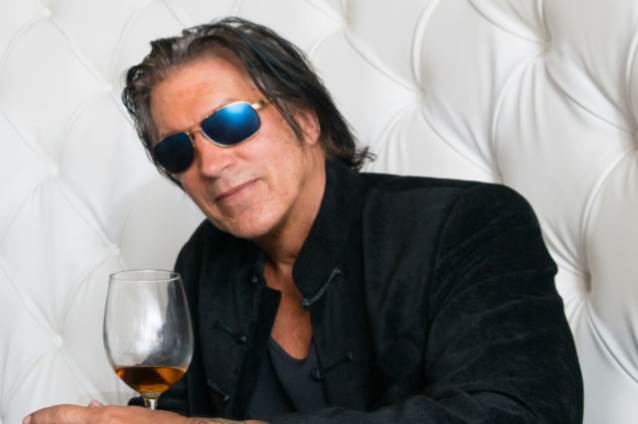 GEORGE LYNCH On LYNCH MOB's Lineup Changes: 'It Is A Revolving Door'

For some of its recent shows, LYNCH MOB has been utilizing the services of two different vocalists, depending on each frontman's availability: former LYNCH MOB singer Robert Mason, and ex-BLONZ vocalist Nathan Utz.

George addressed the uncertainty surrounding LYNCH MOB's lineup during a recent interview with SiriusXM's Eddie Trunk. He said: "It's confusing, and I don't want to confuse people.

"The thing with LYNCH MOB, it is a revolving door. It's always in a state flux, and I've learned to accept that and just live with it.

"When I was younger — when I say younger, I mean, like, in my 40s [laughs] — I had this dream that it would be just your garage band — your friends from school, and you would go on to make it, and you'd be friends for life and it's your family" he continued. "I haven't been able to succeed [in that] — I haven't been able to keep that together. Really, I've just learned to accept that things are going to change. That's the only thing that's inevitable, is [that] things aren't going to remain the same.

"I'm not really sure what's going to happen with the band," Lynch admitted. "It's going to remain intact. Right now, it's [drummer] Scotty Coogan, who's been in the band before. Bass players, we've got Michael Devin [WHITESNAKE] sometimes; we've got Sean McNabb sometimes. That's a revolving door there. They're both wonderful. We also have two different singers — Robert Mason, who does 75 percent of the shows, and Nathan Utz. It's an amorphous, fluid thing.

"I started thinking about it and go, 'Wait a minute. Every time we have a member change, I sort of tend to kind of blame it on other things.' I go, 'Wait a minute — what's the common denominator here? Maybe it's my fault. I'm the reason I can't keep a damn band together.' It's almost like an unwritten rule in the rock world here that you have to be in LYNCH MOB. It's sort of a rite of passage."

Utz made his live debut with LYNCH MOB on March 9 in Medina, Minnesota.