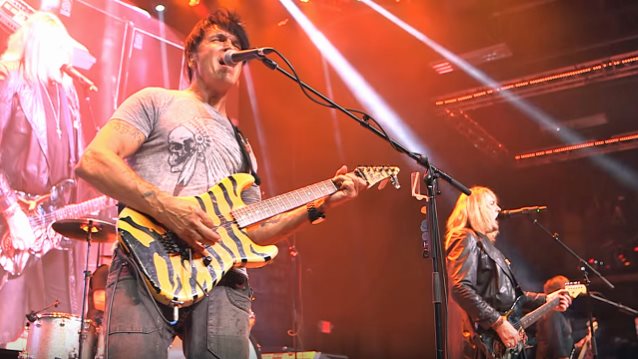 GEORGE LYNCH On New DOKKEN Song: 'It's Not Us Trying To Reinvent Ourselves Or Pretend We Are In The '80s'

Legendary guitarist George Lynch says that the new DOKKEN song that will be included on the band's upcoming CD/DVD package is "a super-fun" track that sounds like "a slightly more modern-day" version of DOKKEN's classic material.

The DOKKEN DVD, which will focus on the fall 2016 reunion tour of the band's classic lineup, is tentatively due before the end of the year. The set will feature footage from two of the Japanese shows — including Tokyo — as well as the band's very first comeback gig, which was held on September 30, 2016 at Badlands Pawn Guns Gold And Rock 'N' Roll in Sioux Falls, South Dakota.

Regarding the new song which will be included on the CD, George told Myglobalmind: "We never played it live because it would be out there and bootlegged. We didn't have the time to work it up.

"I can say it's a super-fun song and sounds like a slightly more modern-day DOKKEN. It's not us trying to reinvent ourselves or pretend we are in the '80s. It has the elements that are obviously DOKKEN and will be on a new live CD/DVD that we are working on. It will also include two or three semi-acoustic versions of older DOKKEN songs like 'Will The Sun Rise'."

Speaking about the DOKKEN reunion tour, George said: "It went surprisingly well. It was interesting; for all the time that has passed, we realized that we are all the same people we were from back in the day. [Laughs] The same personalities — just a little older. We were making fun of ourselves because we are the old men that we said we would become someday, but still kids at the same time too. It was really nice the way we joked and interacted."

Asked if the chemistry was still there when DOKKEN played live, George said: "It was. We didn't have enough time to really explore that as much as we would have liked to. It was a whirlwind gig, to fly out to do seven shows, but we still have it. When you put the four of us together from DOKKEN, you just can't help sounding like DOKKEN."

Lynch recently told the "Trunk Nation" radio show that there is a possibility that DOKKEN will be back for more live appearances next year, although he declined to discuss specifics.

Bassist Jeff Pilson told "Trunk Nation" that the Japanese tour was "very, very drama-free; I was kind of surprised — very pleasantly so. It was a great time," he said. "We actually had a lot of fun. We connected on a friendship level that I wasn't really expecting, to be honest with you, and it was great. I mean, it was really, really fun — much more so than I was expecting."