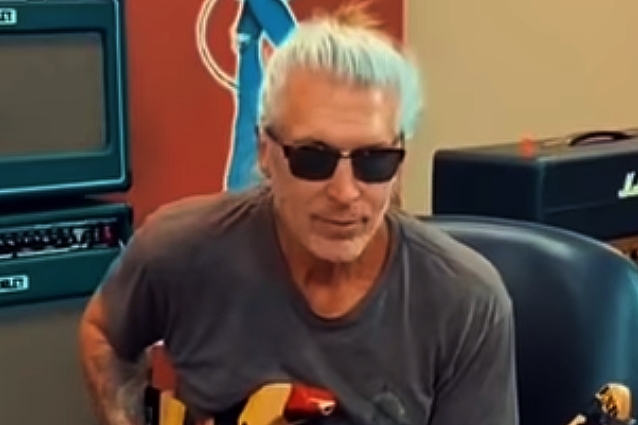 GEORGE LYNCH Says DOKKEN/LYNCH MOB Tour Is In The Works

On having to cancel his appearance with DOKKEN at this year's M3 Rock Festival after contracting pneumonia:

On whether he's considered making an instrumental "shred" album:

George: "Absolutely. I have some trepidation about it because of the glut of insane players who are making it hard for old guys like me to keep up. I look at all those Instagram guys, and my mind is just blown every day. It's so beautiful, because a lot of it is, they're not doing what they did in the late '80s/early '90s and just going hyperspeed shred. They do that too, but they're going back to bebop and jazz and Wes Montgomery stuff, Joe Pass stuff — just really heavy, playing over changes and doing really beautiful even traditional music. On top of that, the Tosin Abasi, multi-string, multi-tapping, two-handed, all that stuff too, and putting it all together and coming up with hybrid new stuff, which is fascinating... I've been trying to do the finger[picking] thing. I can't really do it. I do a fake finger thing, and that's just me trying to be Jeff Beck, because I think we all just want to be Jeff Beck."

On his memories of playing on the HEAR 'N AID charity single "Stars":

George: "There was a line outside in the outdoor patio area going into the room, and it was almost like waiting at the DMV, except that every fuckin' guitar [player]... If you wanted to get rid of all your guitar competition, you just plant a bomb there. You would have been the only guy left, and would have won by default. Everybody was scared of Yngwie [Malmsteen], and rightly so. He was just emerging at the time, and that, I think, performance really cemented him into the history books. His place in the hierarchy was established after that pretty concretely. I noticed that when everybody went in, everybody was chasing Yngwie, so everybody was playing faster than they normally do, but uncomfortably so — kind of frenetic and nervously. I was doing it too, but it was hard to be yourself because this guy cast such a large shadow. It was a problem listening to the record for me and trying to differentiate the different players. It seemed like they all just kind of ran together, except for Yngwie."

George: "Right now, we're kind of in the trenches with our new LYNCH MOB record. We've got 15 songs on the board that we're pretty much done with, and we're going to write a couple more. [We're] starting to get the vocals figured out, and Jimmy's [D'Anda] starting to get the drums down on it. Most of the guitars are done. All the solos are pretty much done, except for two. We're getting pretty close, and then I switch over to another two records that I'm working on. One is a project I've been working on for six years or so with Tommy Victor from PRONG and a programmer/mixer/engineer guy named Haze who's worked with a lot of industrial bands and stuff. It's a real heavy but trippy record. It's called THE BANISHMENT. We're going to try to finish that up... I always loved that kind of music, but to me, it was like, 'God, I'd love to hear this kind of stuff, but with me in it.' I really think it would be an interesting thing to hear. The guitar that I imagine being over that, you never hear that. It's always like plugging in and just get some chords, but how about doing something that's bigger — like if Eddie [Van Halen] was in NINE INCH NAILS?... I've got another one that's all done, in the can. It's called DIRTY SHIRLEY. It's the drummer from EVANESCENCE and singer Dino [Jelusic] from TRANS-SIBERIAN ORCHESTRA. He's a monster."

On having numerous musical outlets:

George: "I used to have writer's block. It's a thing that most creative people have to deal with at some point in their lives. Sometimes, stuff wouldn't flow and it wouldn't happen. That has not happened to me in decades now, so now, as long as it's there, I'm going to take advantage of it while the tap's flowing... I just feed off other people. It's like the Zelig effect — that Woody Allen movie 'Zelig'. It's a faux-documentary where he becomes a chameleon, so whoever he hangs around, he sort of becomes that... It's absolutely career suicide to do this. Every manager tells me that labels are all pissed off at me — they're, like, 'You didn't tell us you had all these records coming out on other labels.' I'm, like, 'You know what? I have a right to make a living, and I love making music. There's nothing I love more than sitting in the studio, playing my guitar and writing songs with my friends. This is what I love to do, and as long as I can keep doing it, I'm going to keep doing it."

Over the past two years, Lynch — one-fourth of the classic DOKKEN lineup — has appeared on recordings by THE END MACHINE, KXM, ULTRAPHONIX and SWEET & LYNCH. The as-yet-untitled new LYNCH MOB album, expected to be released in 2020, will serve as the follow-up to 2017's "The Brotherhood".