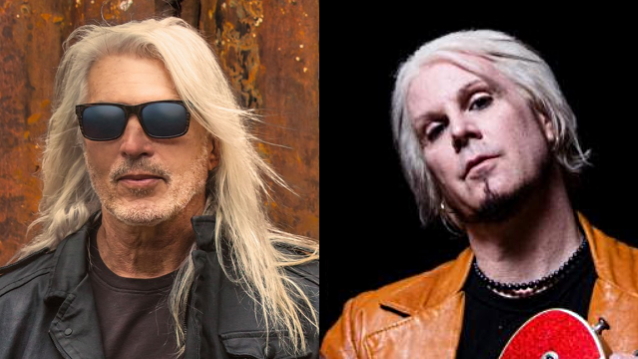 George Lynch says that he was the one who originally suggested to John 5 to release an album via a series of music videos, one song at a time, before unleashing the full-length effort.

In 2019, John 5 adopted an interesting approach to issuing his "Invasion" LP — instead of releasing it all at once; he made it available one song at a time, with an accompanying music video, on the first day of each month for several months, before dropping the album in July of that year.

During appearance on "Guitar Autopsy", the video podcast hosted by Rusty Cooley, Lynch discussed the idea of releasing a series of singles a couple of months apart before unveiling the full album. After Rusty floated the prospect of making individual songs available prior to the release of the actual LP, Lynch said (as transcribed by BLABBERMOUTH.NET): "I had that exact same thought a few years ago, and I was talking to John 5. I was at [a studio] in Burbank and John was there. There was a little studio there, a guitar-centric studio, and he was working in there. And I was talking to him and the engineer about that idea — that actual same idea, what you just said. I was, like, put out a song a month, you buy the song a month, and we're gonna have a video for each song. And then, at the end of the year, we'll take those 12 songs and we'll repackage it and resell it as a CD and get paid twice and do this whole thing with a bonus track and all this stuff. He turned around and did exactly that. Not that it was my proprietary idea, but it just kind of [was], like, 'Wow.' Then I remember going back in there and him telling me about it like it was his idea. Or no — it was his engineer who was telling me about it. 'Yeah, man, we're gonna do this thing…' I go, 'Yeah, that's kind of what I was telling you about, like, a year and a half ago. But that's cool.'"

Lynch added: "I never ended up doing it. And I wondered how it worked out for him — if that actually was a smart way to go. Because the downside is you've gotta be promoting and marketing everything for a whole year versus a regular record album cycle, [which is] 30 days now, or 45 days or something."

Back in 2019, John 5 told "Wired In The Empire" that "releasing a new song and a new video every month" was something he had "been working on for a long time." He added: "I think it's a really great way to do something like that. It keeps the record alive and keeps people interested in what's going on with everything so a record doesn't die in a month or something. It keeps the record alive for a little while and it's wonderful. It really has been working out well. The songs — we've been having a lot of fun playing them and we've really been having a great time."

John 5's latest solo album, "Sinner", came out on October 29 via Big Machine Records. The LP was produced and mixed by Barry Pointer at Riott House Studio in North Hollywood.