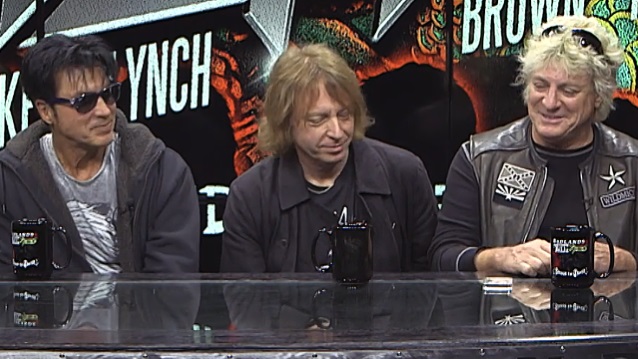 George Lynch has confirmed to SiriusXM's Eddie Trunk that three members of the classic DOKKEN lineup have reunited in a new project called SUPER STROKE. The band, which is rounded out by former LYNCH MOB and current WARRANT singer Robert Mason, is working on material for its debut album, to be released in late 2018.

Lynch, who is joined in SUPER STROKE by his onetime DOKKEN bandmates Jeff Pilson and Mick Brown, told Trunk: "I'm literally sitting here writing and recording with Jeff at Jeff's studio for that project.

"I've got to tell you, I'm probably in the bands with the worst names in the history of rock and roll," he joked. "You know, SWEET & LYNCH, T&N, LP, SUPER STROKE, KXM — I mean, absolutely no imagination. I'm sorry. I have to apologize up and down. But I don't know about the idea of, like, 50- and 60-year-old dinosaur rockers being in a band called THE SUPER STROKERS, but they insisted on it. I lost the vote, so that's what it's called, I guess, at this point."

Describing SUPER STROKE's music as "just insane," George said that he and Jeff "are sitting here just out of our minds, having so much fun. It's kind of like all these different projects are really just one big giant project. We just keep trying to say the same thing over and over until we get it right.

"The SUPER STROKE thing, like the new DOKKEN track [that was recorded for the upcoming concert album and DVD], it just seems to be a culmination of all our decades of experience of what we've been trying to do forever, and we finally seem to be getting it together," he explained. "This stuff is just coming out so beautifully, and it's just so fun to play on and so fun to listen to. I just can't wait to get it out there in front of people."

Last November, Pilson told Glide Magazine about SUPER STROKE's musical direction: "There's definitely some DOKKEN in there. There is a little bit of the straight-ahead LYNCH MOB-ness in certain aspects but then another aspect we get quite musical. It's not progressive but very musical. Some of the songs are pretty epic in their musicality. George is playing his ass off. I mean, the whole band is playing great, I got to say. And Robert is just an amazing singer and it's so much fun. Robert is in WARRANT right now, and he was the second singer for LYNCH MOB. There's a lot of connections in there."

A CD and DVD of DOKKEN's Japanese tour will tentatively arrive in April. It will feature footage from two of the Japanese shows — including Tokyo — plus the aforementioned brand new song, "It's Just Another Day", for which DOKKEN filmed a video in January.

Singer Don Dokken told "The Classic Metal Show" that the main reason he doesn't want to continue with the classic DOKKEN lineup is that he "loves" the band he has now — which features Brown, alongside guitarist Jon Levin and bassist Chris McCarvill.