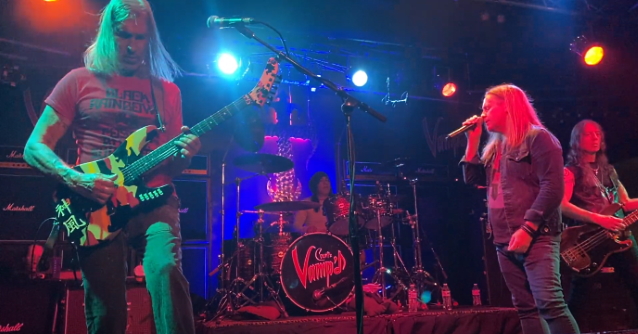 Video of the Vegas concert can be seen below (courtesy of MotorBreathInc and RocknForever1 "Always Classic").

Last August, Lynch spoke to Anne Erickson of Audio Ink Radio about what it has been like to play select shows around the country with his newly christened touring entity GEORGE LYNCH AND THE ELECTRIC FREEDOM. He said: "It's liberating, actually, to be quite honest with you. To have a new band and a new name and a name that — I mean, just the power of the name, 'cause with the new name, which is GEORGE LYNCH'S ELECTRIC FREEDOM, it really is electric freedom. I didn't even think of it that way, but [ELECTRIC FREEDOM bassist] Michael Devin and I were were talking the other day on the way home, and we were, like, 'This really defines the band.' And it really does. Because we're plugged in, we do a lot of kind of just off-the-cuff improvisation during our show, which you don't see very much in rock and roll anymore — not since the '70s. And we're big fans of that; that's what we were raised on. So it's, I think, more alive and vital than your kind of average thing where you go see a band and they're playing songs they wrote 35 years ago. And sure, it's great — you wanna hear the songs, and that's all good. But these guys have been flogging these songs for decades. I've been doing that too. And that's not what I'm about. I mean, I can do it. But I like to bring the audience another perspective and another dimension to what can happen onstage, and that is the creative moment in real time — experiencing that and witnessing that, and for me to play that and the band to play that... And I think the crowd appreciates that. And not just at the moment, but more in retrospect, when they think about it. They think, 'Wow, actually, that was pretty cool.' Every time you come see my band, it's gonna be different. It's gonna be different members [and] we're gonna play different material."

Asked if there are plans to work on new music with GEORGE LYNCH AND THE ELECTRIC FREEDOM, George said: "It's not on the way in the sense that's we're working on it, but we have discussed the idea of doing an EP. We wanna go a little more old school and do something that's pretty easy for us to make instead of taking on a whole album project with a new band. Let's just do four songs, and let's hand one out to the fans for free and just get people into it and put a lot of work into those four songs and make it easy, so it's not this big giant burden for us. And if the EP blows up, which I think it will, then we'll do — when we've been together a little longer, we'll do a real record. But I definitely believe we need to document what this band is, 'cause it's very, very cool."

A year ago, Lynch offered a lengthy explanation for why he was ending LYNCH MOB during an interview with George Dionne of Metal Express Radio. Addressing questions about why it took him three decades to call it quits with LYNCH MOB, George said: "When we first formed the band in '89, the name had sort of already been around. While I was in DOKKEN, it's what I called our little group of guitar fans — I had picks made; it was kind of a little subculture within DOKKEN. When we started working on developing and building the band after DOKKEN broke up, that was just the name that we always thought we'd use, 'cause it was a perfect fit — it's my name, and it describes it pretty well. And, of course, the negative connotations were always there, and I was aware of 'em, but not as aware as I probably should have been. [Laughs]

In August 2020, LYNCH MOB celebrated the 30th anniversary of "Wicked Sensation" with a special limited print/deluxe edition of the album. "Wicked Sensation Reimagined" features re-worked and re-recorded versions of the LP's classic songs, and was made available via Rat Pak Records.

Pics from last night at Vamp'd with George Lynch. 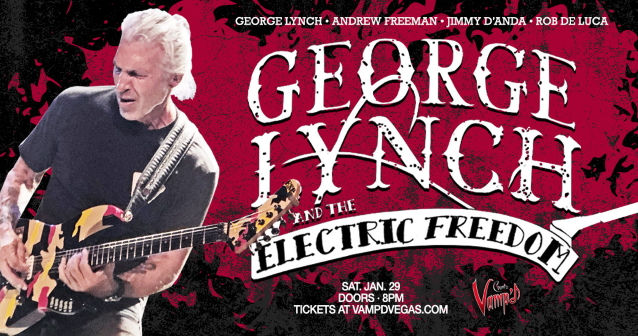