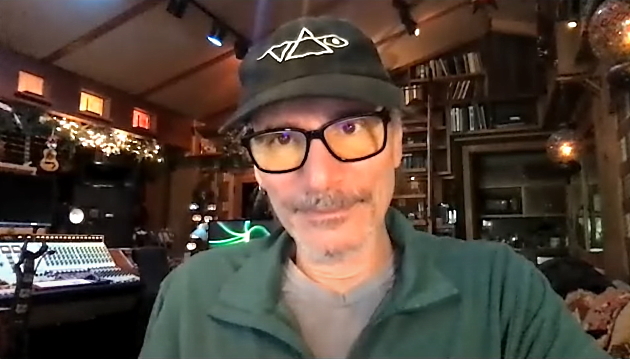 STEVE VAI Tore A Tendon In His Shoulder While Making Pizza: 'I Wish I Had A Better Story'

A little over a year ago, legendary guitarist Steve Vai underwent shoulder surgery to repair an injury. That procedure was successful, enabling him to record his new album, "Inviolate". However, in preparing for a U.S. tour in support of the LP, it became clear that a new injury emerged that requires another surgery prohibiting the tour to be staged as previously announced.

Steve discussed his physical issues in a new interview with SiriusXM's "Trunk Nation With Eddie Trunk". He said (as transcribed by BLABBERMOUTH.NET): "About a year ago last December, I did have to get surgery on my shoulder. I'm usually a totally healthy guy. I do take the holistic approach when I can, but 50 years of abuse playing the guitar, my shoulder just got to the point where I had to really get it checked out. And I got a wonderful surgery, and it healed. And it was funny because while I was healing, I couldn't use my right arm, obviously; I was in a sling. And the sling was called a 'Knappsack,' because the doctor that designed it, his name is Doctor Knapp, and he's the one that did the surgery. So I got home from the surgery and I couldn't play with my right hand, so I actually recorded a song that I called 'Knappsack' with my left hand, and that made it to 'Inviolate'."

He continued: "I got through the pandemic recording the record. And the surgery healed quick and I was able to record the record. But I did something really stupid over the summer. [Laughs] This is crazy. Well, I have a pizza oven, and I was putting a pizza in the oven and the dough sticks on a little plate, and I had to jerk it really hard to pull it and I tore another [tendon]. And I thought I could get through the tour, but the tour is a megatour that we're planning, 'cause I've been just dying to get on tour. And we've got, like, 250 shows that we wanna do around the world, and it's gonna take, like, a year and a half. And once I started to prepare, it became really obvious that there was just no way. And the doctor said that 'it's only gonna worse and there's nothing you can do. I highly recommend you get it fixed before you go out on tour for a year and a half or you're gonna be in real trouble.' [Laughs] So I said, 'Okay.' And the way that the tour is scheduled, it's not so uncommon these days that artists are kind of moving blocks of dates around. And we just took the whole tour — the North American portion — and moved it to the fall, almost completely intact. So it gives me an opportunity to heal and get out there and kick some butt."

When host Eddie Trunk told Vai that he must be a "serious pizza maker" in order to tear a tendon in his shoulder while making pizza, Vai said: "I wish I had a better story." Steve went on to say that "it was the same shoulder but a different tendon" that he injured last year.

Last February, Vai revealed that he had undergone shoulder and trigger finger surgeries, explaining that his shoulder had been "screwed up."

During an appearance on Tyler Larson's "Guitar Villains" podcast, Vai said that he sustained the finger injury by holding a tough chord for too long.

"I was doing this fun thing, and I had to put my thumb in this really weird position," he said. "And I had to kind of hold this chord really for a long time — I was meditating on it. And I knew it was a hard position, and I just kept sitting there and playing it and playing and playing, and 20 minutes later, I'd kind of come out, and I [felt pain in my hand]. So I kind of sprained this, and then, all of a sudden, I developed trigger finger. My wife said, 'Don't show anybody,' 'cause they did that operation and they cut in there, and the guy's fooling around with everything in there, and it's really bizarre. But it's all fine — it's something very simple that they can fix. But I won't be able to play for a while."

"Inviolate" was released on Friday, January 28 digitally and on CD via Favored Nations / Mascot Label Group.

The first U.S. leg of Vai's tour dates will now begin on September 28 in El Cajon, California and wrap the first week of December. The itinerary will now feature performances in 52 markets as opposed to the initial plan of staging 54 shows. All ticket and VIP purchases will be honored for the rescheduled date. Vai's performance in Atlanta, Georgia will now take place at the Variety Playhouse instead of The Eastern and due to scheduling conflicts, the Milwaukee, Wisconsin and Billings, Montana shows will no longer be a part of the tour.