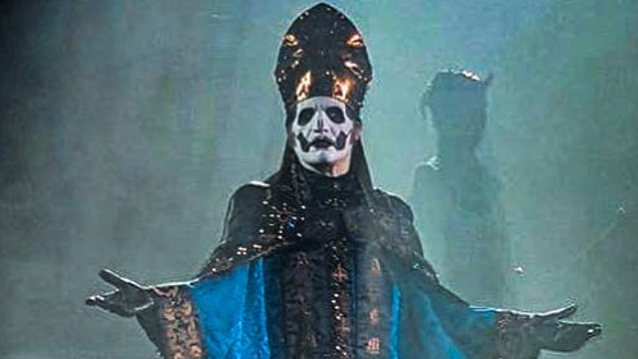 At the final concert of GHOST's "Prequelle" album cycle earlier tonight (Tuesday, March 3) in Mexico City, the band introduced the new character who will front the act for its next LP phase: Papa Emeritus IV.

During the saxophone solo in the song "Miasma", Papa Nihil — an ancestor to all other Papas — collapsed and a large group sisters came out around Cardinal Copia and transformed him into the new Papa.

Video footage and photos of the big reveal can be seen below. (Photo above courtesy of Summa Inferno)

After the show, GHOST shared a few photos on its official Instagram and included the following message: "Gracias México City for your hospitality and warmth. We couldn't pick a better place to witness the anointment of Cardinal Copia to Papa Emeritus IV. Papa and the ghouls are incredibly thankful for all your wonderful gifts. Looking forward to seeing all of you in 2021. #papaemeritusiv #namelessghouls #namelessghoulettes"

GHOST mastermind Tobias Forge performed as a "new" Papa Emeritus on each of the band's first three LPs, with each version of Papa replacing the one that came before it. Papa Emeritus III was retired in favor of Cardinal Copia before the release of 2018's "Prequelle" album.

Last October, Forge confirmed to U.K.'s Kerrang! magazine that there would be a new character fronting GHOST by the time the group's next LP sees the light of day. Forge said: "I just know that person will have the name Papa Emeritus IV. It will be the fourth Papa Emeritus. But who that is, we don't know yet."

Back in September, Tobias told Illinois's Herald-Whig that GHOST will do "absolutely zero" touring in 2020 as he turns his attention to the band's next studio album. A couple of months later, he revealed to Finland's Kaaos TV that he would record one new song in January before getting to work on GHOST's fifth album.

Forge did not indicate where the standalone song will surface, but he added that he'll continue writing through May, with plans to enter the studio on June 1. He remarked: "Hopefully then we're gonna start recording the drums for all these 15 songs — something like that — I'm gonna write. Some of them are written, some of them are in bits and pieces, and some of them I don't know yet."

The musician, who plays most instruments on GHOST's albums except drums, added that he wants to create songs meant to be played in large venues, saying: "Making a new fifth album means that I'm gonna continue writing songs that will sound great on [an arena stage]."

The Pulse Of Radio asked Forge if he's okay with having his life planned out years in advance. "I prefer it that way," he said. "When I had no plans whatsoever, I didn't get anything done. And I'm sure that one day when we're not in demand and all of this might be over, I'll have plenty of time to think about that."

Four years ago, GHOST became the first Swedish rock band ever to win a Grammy — 2016's "Best Metal Performance" for the song "Cirice".

Photo above courtesy of Summa Inferno

Gracias México City for your hospitality and warmth. We couldn’t pick a better place to witness the anointment of Cardinal Copia to Papa Emeritus IV. Papa and the ghouls are incredibly thankful for all your wonderful gifts. Looking forward to seeing all of you in 2021. #papaemeritusiv #namelessghouls #namelessghoulettes

Drunk T just dug up another shot of Papa IV at the Ghost show in Mexico. 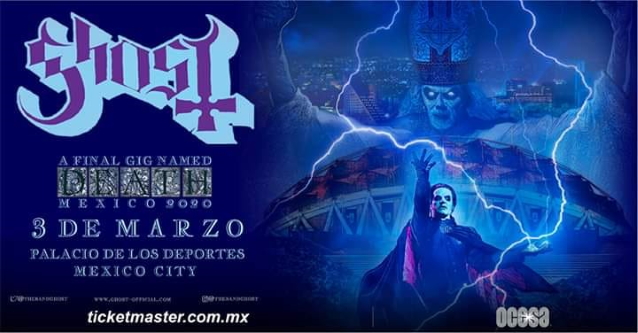