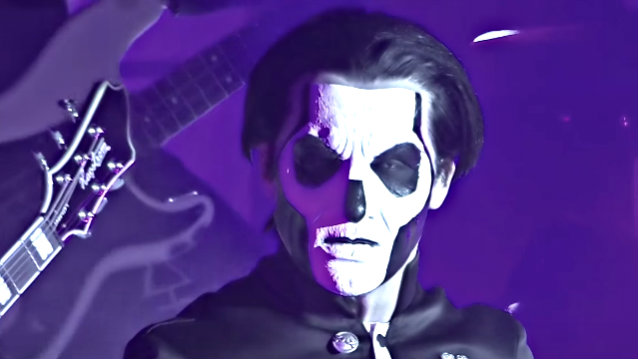 GHOST frontman and founder Tobias Forge, who performs as Papa Emeritus, hopes to re-team with Swedish producer Klas Åhlund for the follow-up to the group's 2015's album "Meliora".

Asked in a brand new interview with Italy's "Heavy Demons" radio show what Klas contributed to the making of "Meliora", Tobias said (hear audio below): "He brought a focus. I liked working with him because he was very, very… questioning. He was, like, 'This part, it sounds like you haven't really thought about that part so much, where it sounds like this part you spent hours on. Is that true?' And I was, like, 'As a matter of fact, yes. That part is not as important as that part.' [And he would tell me], 'Take it off. Take it off. Why do you need it then? Don't do it.' [Or he would say], 'Write something else. Write something better.'"

He continued: "You really had to step up your game. And I definitely need that. I like writing like that. I like having to prove myself, because I think that oftentimes… This is definitely what I would do if or when I would produce someone else… Don't leave anything to chance. Because songs are so important. There's many, many, many songs written, but not all of them are good. And most people can agree that that song, that song, that song, that song is a good song, be it 'Ace Of Spades' or 'We're Not Gonna Take It' or 'Bohemian Rhapsody'. And what's common with them is they're very well written. Even if 'Ace Of Spades' is, like, raunchy metal, it's still a song that contains no fat. Take out the fat. Be to the point. And that's what I learned from Klas."

Forge added: "I'm hoping now that we're gonna work with him again for this album. We haven't really decided yet; we're still sort of trying to make the schedules work and all that. But I will forever, for the rest of my life, I will have Klas sitting on my shoulder [guiding me through the songwriting process]."

When pressed about where Papa draws most of his vocal inspiration from, Forge — who once again did the "Heavy Demons" interview disguised as a member of his backing band of Nameless Ghouls — said: "I don't know about him, but when I write the music that he's playing, or he's performing, I write from a very vocal point of view. I would probably say that the biggest influences from a vocal point of view, coming into arrangement and writing songs thereafter, comes from other bands, or artists, that I would reckon do the same thing. QUEEN is a simple example where I'm sure that most of the songs that they even wrote collectively often had a very vocal signature theme rather than just a riff. A big other influence, for me, is THE DOORS. So I guess there's a little Jim Morrison in there. And actually Morrissey. I'm a huge fan of THE SMITHS. Even though you might not hear it in GHOST, but it's very SMITHS influenced in the sense that THE SMITHS always wrote different songs. They were very bold, and I am very influenced by bands that are brave. I like that."

GHOST's most recent release was the "Popestar" EP, which was produced by Tom Dalgety, who has previously worked with PIXIES, ROYAL BLOOD and OPETH, among others.

Forge is being sued by four ex-members of GHOST who have accused the band's leader of cheating them out of their rightful share of the profits from the group’s album releases and world tours.

The four musicians were offered two separate contract proposals by Forge in 2016, which they rejected as "slave agreements." That may have led to Forge's wholesale firing of the band at the end of 2016.

The new lineup of GHOST, which made its live debut in late March, is rumored to include musicians who have previously played with THE SISTERS OF MERCY, KORN, PENDRAGON and BLOODBATH.