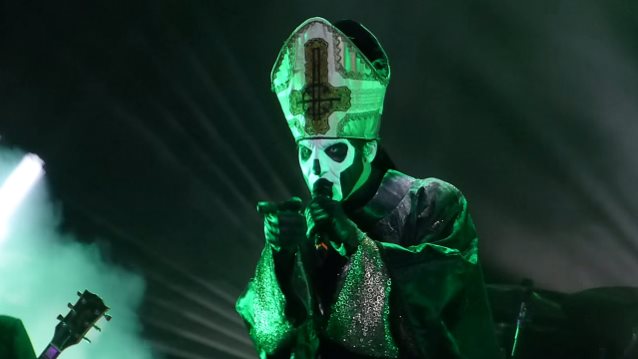 GHOST: New Song 'From The Pinnacle To The Pit' Available For Streaming

"From The Pinnacle To The Pit", a brand new song from Swedish occult rockers GHOST, can be streamed below. The track is taken from the band's third album, "Meliora", which will be released on August 21 via Loma Vista Recordings. The follow-up to 2013's "Infestissumam" was helmed by Klas Åhlund, a prolific songwriter, producer and guitarist who is also a member of the Swedish rock band TEDDYBEARS, and was mixed by Andy Wallace (SLAYER, NIRVANA, SEPULTURA, LINKIN PARK, GUNS N' ROSES).

Asked if there is any kind of special audition process for picking a new Papa Emeritus, a nameless ghoul from GHOST told Music Radar: "Fortunately for us, we don't have to do auditions where you put people through the paces. We just expect somebody to be on time, in tune and somewhat glad. Usually we don't see much of our Papas — 'cause they're hanging out with the mamas. [Laughs] They tend to appear as we go on stage and disappear just as quickly. We don't socialize or fraternize that much, which is cool. I don't know him very well, really. He's very new to me."

Regarding whether the fact that the various Papas are "emeritus'" means that they never really go away, the nameless ghoul said: "Well, that's the ironic thing. 'Emeritus' in the tradition of popes means that you're dead — you never get that title until after you've died. Benedictus was the first pope in something like 400 years who was named 'emeritus' while he's still alive. He got to retire with that title. So our Papa Emerituses get to retire, but they're still here."