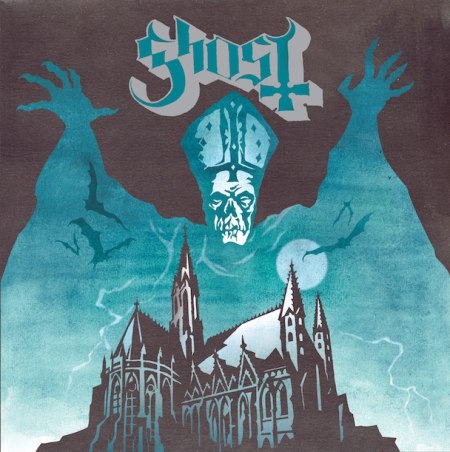 Hellbound.ca recently conducted an interview with a nameless ghoul from the mysterious Swedish buzz band GHOST. A couple of excerpts from the chat follow below.

Hellbound.ca: Were you taken aback by the band's almost immediate popularity?

Nameless Ghoul: It's hard to say. We knew what we were doing was outside the box. We expected something. But again the album was released in Europe by a small label known for putting out curious, weird stuff. The commercial expectations weren't high. We did do this with the intention of turning heads, but all of the success we've had in the past year has been unexpected. But again, it gets back to being anonymous. When you are experiencing these breakthroughs and traveling and doing it as an individual, you aren't gaining a bunch of new friends or experiencing carnal pleasures you might experience if you were suddenly recognized. We live in Sweden, in a small town without a lot of people. We aren't in the epicenter of where anything happens with the band. We go on the road, enter the bubble, then break the bubble and come home. A lot of bands living in London are expected to be rock stars all the time. That is truly diabolical (laughs) and not the way we want to live.

Hellbound.ca: So GHOST doesn't need to live like Russell Brand in "Get Him To The Greek", where you need to be a persona.

Nameless Ghoul: I'd say so. We're often mistaken for roadies, which is helpful. We've almost been thrown out of venues we've played. Forgetting our backstage pass is a big problem. Nobody really knows who we are. If you don't look like a rock star who just played, you might be a bullshitter trying to get backstage. That keeps things interesting. It allows us to relate in a more healthy way to what we're doing, because we don't need to be associated personally with what we do culturally.

Hellbound.ca: Have any of you ever gone out in crowd without your outfits?

Nameless Ghoul: We do that all that time. Not in groups, but individually. People will come and crowd our singer when he's offstage and take pictures. Fifteen minutes later, those same fans will go right next to him and act like he's just a nothing. That's happened to all of us. That's one of the perks of being in this band. And it shows that it works.

Hellbound.ca: What do you think about the argument that GHOST isn't metal. Do you even care?

Nameless Ghoul: We never set out to be a metal band. For us, it's not an issue. All of us come from a metal background. Our upbringings are rooted in metal. But we're open-minded and we don't depend on people to give us metal credentials. We know we already have them. It's not even interesting to us. Obviously, I know how people think when they are an 18- or 20-year-old metalhead. People can be really anal when it comes to differentiating what's metal and what's cool and what's not. I know where true headbangers come from. But what we set out to do and achieve is outside of that. We incorporate melodies and structure and riffing to achieve a horrific sound. It's supposed to be frightening and seducing. If someone chooses to call it pop, that's their loss. Everyone can't like the band. As long as they talk about the band, that's perfect. When people try to slag the band, it's mission accomplished. We've made people turn their heads.

Hellbound.ca: Are you working on a follow-up to "Opus Eponymous"?

Nameless Ghoul: We are working on new material and a lot of it is finalized. We know the direction the next record is going. We've tried to keep the same playfulness from the first album. A lot of the songs on "Opus" came without a filter. We didn't try to exclude anything, just make it challenging and dramatic. We've managed to put together something that comes from the same source. But we've also chosen to emphasize new things on this record. We've been using the word "divine" through the creation. This record will be slightly bigger, not in the commercial sense, but the sound will be a little bit bigger than the first. There are also different philosophical themes in the first record versus the second. The first album deals with before the Antichrist, something foreboding, something in the future. The songs are about a darkness or Antichrist almost upon us. The new record is about the presence of the Devil, the presence of the Antichrist. It's also about how people relate to a deity or God, themes like submission and superstition, the horrors of being religious. There's a step thematically. The third record will take it even further.

Read the entire interview from Hellbound.ca.

Video footage of GHOST's November 30, 2011 concert at 013 in Tilburg, Holland can be viewed below.