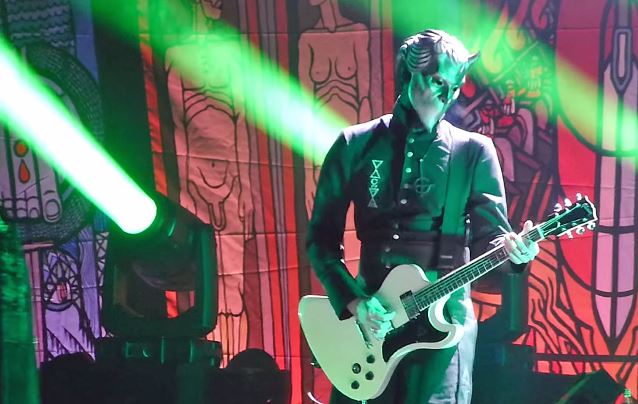 In a brand new interview with Australia's Music Feeds, one of the nameless ghouls from Swedish occult rockers GHOST was asked if the bandmembers perhaps see themselves as going into battle against the music industry in some way due to the themes covered in the group's music. He responded: "I would not put it that way. It depends on what you mean by the music industry. I mean, for one, we are among the very, very few that actually sell records, which I am extremely humble about. I really respect the fact that to get someone to go out and buy a record — that is a big accomplishment nowadays. We could never do that without the aid of the music industry, because there's a common misconception nowadays, especially amongst bands that never really have made it, that you can make it without a record company, and that's not true. In order to break through the clutter and to spread the word, you need a record company — big or small, that doesn't matter, but you still need the aid of others, and, unfortunately, the last few years there have been a lot of bands from a completely different stratosphere that have somehow managed to make people believe that you can without it [a record company]."

He continued: "You know, RADIOHEAD and U2 [laughs], don't fucking look at those bands, because they obviously sell a million records either way. They can give away a record like nothing. They've already earned gazillions of dollars on everything and still they can make a hundred shows on the back of those that generates millions too, so it's very sad that that has spread a false hope among bands that think you can just fuck the industry. However, I definitely think in the sense that we as a band, we are a part of the contemporary music scene."

He added: "I don't want to declare a war but I really hope that what we can change, or what we can help change, is the climate of the rock music scene because I am so gravely tired of this sentence for a name, emo, metalcore crap that has been infesting the music scene for the last 20 years. I hate it with all my fucking heart, and if we can in any way aid the music scene towards pushing towards something new or something different, I would be extremely happy. That is as far as my war instinct goes, I guess."