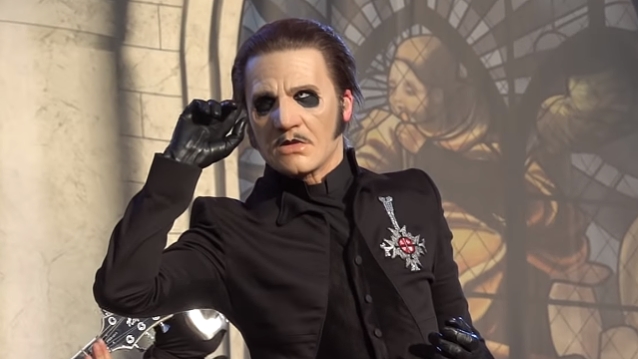 GHOST frontman Tobias Forge recently spoke with the Atlanta radio station Rock 100.5. The full conversation can be streamed below. A few excerpts follow (as transcribed by BLABBERMOUTH.NET).

On his recent comments about a lack of ambition in the modern rock/metal scene:

Tobias: "I was being asked about the future of arena rock, and I think more from a bigger, commercial point of view. I think that there's plenty of talent and plenty of ambition out there. It doesn't have to be an ambition flaw if you're not aiming at the top. I know a lot of bands that are extremely talented and very good, but they're not interested in becoming a 'big band,' or 'making it.' Whereas some that are very adamant about making it doesn't [sic] necessarily have what it takes, or time is not really on their side. I think it's important to underline [that] what I meant was from more of a, like, arena rock point of view, where there isn't a whole lot of apparent new bands out there that you know, 'That band will make it. That band will become big.' I guess there's too many bands who have set their goals on a completely different level. When you're doing that, then it's very hard. You don't accidentally turn into a big band. Not even NIRVANA accidentally turned into a big band. They toured — they wanted to become a big band. They didn't necessarily want to become that big of a band, but they still wanted to make a really good record and wanted to come out and tour. Most bands that don't want to become big at all, they don't play. If you don't want to be known, if you don't want to make it, don't play. That's the easiest way not to do it. I'm not necessarily critical of every band — I think there's plenty of good bands out there. Across the board, not pointing fingers at specific bands at all — and this has been a problem for many years — I think that the problem is especially in current rock climate, 10, 15, 20 years maybe, is that there seems to be a lack of ingenuity. A lot of bands don't want to be part of something that isn't sort of current. Most bands in rock history, even though you were a prog band in 1973, you didn't want to sound like a prog band from 1972. You wanted to sound like a prog band from 1974. A lot of bands, especially from where we come from... GHOST oriented from some sort of occult rock [scene]. There was apparently a little bit of a movement at that point, and maybe there is still, of occult rock bands, but many of them — not all, but many — have been so busy paying tribute and trying to mimic. [If] it's certain bands that they want to become like, that's fine, but if you have an ambition to become big or successful in any way, you need to at least try to use at least five different things to make your omelet. You need to sort of try at least to make it look like you're doing something else, and not just an homage to this certain band that you want to be like. I think that's been a problem in modern days in general. If you have a big band coming out in some way, be it LINKIN PARK or FRANZ FERNINAND... imagine all the bands after [THE] WHITE STRIPES. All of a sudden, there was [sic] bands all over the place with two people. Everybody just looks around and becomes so influenced from what is currently happening. Sometimes, being influenced is very intuitive and very pure, but on the other hand, there's also a lot of influence that is more from a thematic point of view – like, 'This band seems to be doing well, and they're doing this, so let's do that.'"

On whether he feels GHOST's occult image and lyrical themes are misunderstood:

Tobias: "Some people might take it a little bit too literally. Apart from maybe a few songs on the first record, which was a little bit nonsense... I was paying homage to an idea, because at that point, I was not really in the mindset that we were going to become a big band. I was just trying to do something that I felt very strongly, warmly about – a record that sort of reminded me... basically, the record that I wanted a few bands – I'm not going to name any names – that looked really cool and had a really cool image, but didn't necessarily have the songs that I wanted them to have. Cool image bands, but that paid too much attention to their image. I wanted GHOST to be that — 'Imagine if this band had good songs. What would they sound like?' At that point, it was very homage-like, whereas after the whole debacle of the first record, where we became a hype and all of a sudden we went from nothing to something, and all of a sudden it was a professional band, with me all of a sudden being a boss and paying people to be in the band and getting us tours to get people paid and being out on the road, and getting signed to a major label and having a crowd, it dawned on me — if I'm going to make a record again, if all these people are listening, I might say something. Once I got their attention, it's better to say something valuable rather than repeating the ingredients for a magic potion, or whatever. I think that from the second record, especially, and onward, I think it's important to keep in mind that the music got a little bit nuanced. I was very adamant about not repeating 'Opus Eponymous', which would have been a very safe and very sellout way to keep whatever momentum there was on that record, but I was always very adamant about us moving forward, and I was always very adamant about there being [a] double meaning to the lyrics. Even though it's very occult-oriented, and if you asked a God-fearing preacher somewhere on a field, obviously he or she would deem whatever I'm saying as being deeply, deeply devil-worshiping and heinous and blasphemous. It all depends on your point of view, I guess, or your standpoint, or where you're from, or your intelligence, maybe."

Upon its June release via Loma Vista Recordings, GHOST's latest album, "Prequelle", landed at position No. 3 on the Billboard 200 chart, shifting 66,000 equivalent album units during its first week of release. Of that sum, around 61,000 were in traditional album sales.

Forge has said that the theme of the album has to do in part with the arrival of the Black Plague in Europe, among other events in history.

GHOST will hit the road this fall for its "A Pale Tour Named Death" tour that commences October 25 in Dallas, Texas, and includes two headline arena shows, The Forum in Los Angeles on November 16, and New York City's Barclays Center on December 15.