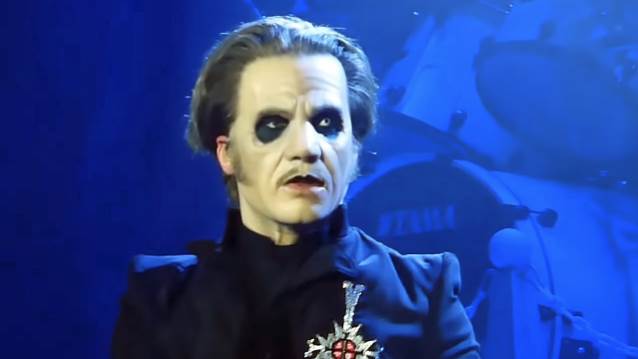 GHOST's TOBIAS FORGE: 'I Like Music That Moves Me And Makes Me Feel Things'

France's "Heavy1" radio show recently conducted an interview with GHOST leader and frontman Tobias Forge. You can listen to the entire chat at this location. A few excerpts follow (transcribed by BLABBERMOUTH.NET).

On what inspired the theme behind the band's new studio album, "Prequelle":

Tobias: "I think when you're dealing with that sort of imagery, the whole occult and sort of darkness-embracing landscape, there are certain things that are recurring. Anything from spiderwebs to graveyards [laughs] and upside-down crosses, but also the plague and Middle Ages, it's a very clear manifestation of mankind needing a godliness that might not be super-happy with mankind, which is always interesting from a rock point of view. You're dealing with occult rock. It's a record that is surrounded by death, but essentially, it's a record about survival and to stand that ordeal, so yes, it does definitely come with a glimpse of hope."

Tobias: "I am a big fan of what most people would regard as 'well-written' music. I like music that moves me and makes me feel things and, more than often, it's music that, I guess, falls within a certain sort of pattern, but that could be anything from FLEETWOOD MAC to VENOM. But, yes, I do appreciate a song that has a little bit of a standardized sort of dramaturgical pattern, but I think pop music, I think that JUDAS PRIEST writes pop music. They have a very pop sensibility to their music. PINK FLOYD is also catchy, even though the songs are way longer. I think if you draw comparisons to film, I mean, yes, it's easy to dismiss a majority of half-hearted films as predictable just because it has an easily foreseen, it's a very premeditated storyline because it falls into a certain dramaturgical structure. But I promise you if we sit down and take films that are being regarded as high in culture because they're different, they also follow the same dramaturgical structure because there's something in our psyche that feels better absorbing something if it's done in a certain a way. Kind of like if you're serving a dish. It needs a certain amount of salt and shouldn't contain excrement in order for it to be tasting well."

On whether he would ever add a female to the GHOST clergy:

Tobias: "We already have Sister Imperator. I think it's very important for life and society itself, but if we're focusing in rock, I think it's very important to not only acknowledge, but also to rejoice in the fact rock and roll is based on both genders. I think that oftentimes, especially in metal it has a tendency to be a little bit disregarding of that fact. Nowadays, what you'll see when we start playing live again is there's going to be a little bit more of a unisex band. We have a few girls in the band. That makes life and the show so much better to have that dynamic."

On transposing their live show from regular concert halls to a festival setting:

Tobias: "Now we're making things more difficult, I guess, just because on the tour that we're doing before the summer, the show that we intend to do is over two hours long. We're playing 20-plus songs and it's like in two acts. First, we play an hour, then we have intermission, then get started again and do another thing. That won't work in a festival, so regardless, we have to sort of trim it down. Even if you're headlining you might still just play an hour, hour and-a-half. Either way, we have to trim it down. There's a level of production that we're bringing to the tour and that we will bring later to the European headlining tour that we don't really have the ability to do the exact same thing at a festival. But, if you are headlining that stage, that usually gives you a little bit more leeway, a little bit more possibility to recreate your show somewhat."

On the biggest misconception about GHOST:

Tobias: "I don't think a lot of our fans — I don't feel misunderstood, but sometimes I guess that from a creator point of view where, obviously, I'm trying to pack this dish with as many interesting things as possible, you could get a little, sometimes it feels like when you do this enormous dish, you stand for three hours and make it and someone comes in and eats it very quickly and they burp and they say, 'That was really good! Let's jump for dessert.' But, at the end of the day, GHOST is one thing in my head and my heart and it's my child and my child can never be everything it is to me to everyone else. I have to be very happy that people like some of it. Also, GHOST means so many different things to so many more people than to me. I'm just happy that I've been able to reach out to people that way. If they like GHOST that might not emphasize so much, fine. I think that's the most important when you're creating. If you're trying to create art, it's one thing if your thing is doing speeches or you're a politician, then your task is to convey a certain opinion or a certain movement that is supposed to go that way, whereas art should be about in some way, just giving people a reason to continue, preferably forwards, but also a great thing about good art is if you're able to get people to, in turn, [start] creating things. That, rather than just absorb. So, with that being said, I think the amount of creativity among a large portion of our fans gives me a receipt that there must be something being done right if it creates this surge of creativity amongst our fans, but it also gives me a little bit of humbleness to the fact that I was saying just before, that GHOST is what I have been part of making seems to have taken on a different life in another people. So, you have to have a little bit of respect to that as well, rather than just saying, 'The whole thing is mine. It's my vision. You're not allowed to touch it.'"

GHOST's new album, "Prequelle", landed at position No. 3 on this week's Billboard 200 chart. The disc, which arrived on June 1, shifted 66,000 equivalent album units in the week ending June 7. Of that sum, between 61,000 were in traditional album sales.

GHOST's first week benefits from a concert ticket/album sale redemption offer in association with the band's spring U.S. theater tour, as well as a pair of arena dates later this year.