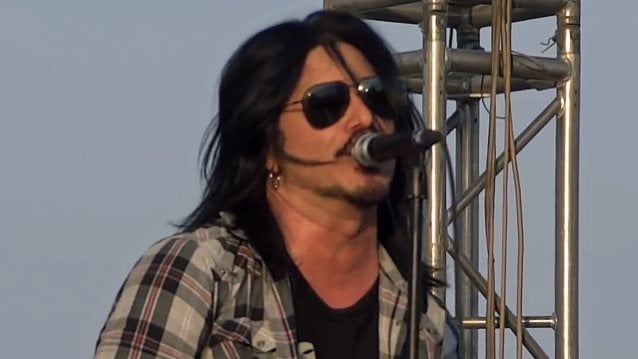 Former GUNS N' ROSES guitarist Gilby Clarke says that he has no hard feelings over the fact that he wasn't chosen to play rhythm guitar for the partial reunion of the band's classic lineup.

Clarke, who was not an original member of the group, told LA Weekly: "I didn't feel I needed to make a phone call about it; I didn't feel I needed to plead my case. If it happens, it happens, and if it doesn't, it doesn't. It didn't, and when it didn't happen, I just went, 'Uh, well, there it goes.' I'm being honest about it. I have such good and fond memories from those years that I don't need to relive it again."

Clarke reunited with GUNS members Slash, Steven Adler, Matt Sorum and Duff McKagan at the band's Rock And Roll Hall Of Fame induction in April 2012, although he himself was not inducted as part of the band.

"From my point of view, I never really thought about it much, ever," Clarke told LA Weekly. "I didn't go through a process of pleading my case to be a part of the band. Not being inducted was definitely a bummer. To be a part of something and not be recognized for it. But deep down, I didn't really care. It's just another two lines on your Wikipedia page. Duff called me literally the day before and said, 'We had a talk and we decided we're going to play. We'd love for you to play with us.' The only thing that was weird for me was when they went up to accept and I wasn't there. I actually had to go somewhere else while they did that. That definitely felt weird."

After exiting GUNS N' ROSES, Clarke continued as a producer and solo artist, while also playing in ROCK STAR SUPERNOVA, HEART and other acts.