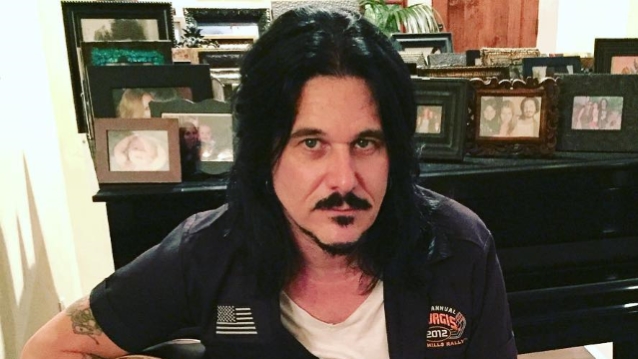 GILBY CLARKE's New Solo Album Is 'For The Most Part Done'

Former GUNS N' ROSES guitarist Gilby Clarke has confirmed that his new solo album is "for the most part done. Obviously, there's a few tweaks here and there, but the songs are done," he told "Rock Talk With Mitch Lafon" in a new interview.

As for when fans can expect to hear his new album, Gilby said: "We don't have a release date yet, but we're shooting for springtime."

Clarke has just kicked off a string of West Coast headlining shows and plans to stay more active on the road in 2019 once the new album has been released. "What I wanna do is start doing just some spot dates," he said. "To be honest, to go out and do a full-blooded 'get in a bus and do a tour,' I'm not there yet. With the record out, I think it will help. So I just kind of wanna get out there and just kind of take the temperature of the audience out there. So there will be quite a few of these — just four-, five-date things. I think we're gonna have a little Texas run after the first of the year. This will pretty much be it for the rest of the year. But starting at the beginning of the year, we're gonna do quite a few of these… I guess we call 'em weekend-warrior stuff."

Gilby also talked about his decision to keep a relatively low profile over the course of the last couple of years with regards to his live activity. Insisting that he has remained very busy behind the scenes, he said: "It's funny, 'cause I get that a lot: 'What are you doing?' And I always feel like, 'Do I have to announce my biography of the current last three years?' But I work — I work all the time. Number one, I consider myself a guitarist, so I do get hired to do guitar jobs here and there. I do a lot of production — I'm a producer; I do produce quite a few bands and artists. I have a really nice recording studio. I just finished a new record by a band called HILLBILLY HERALD, which has been around for a little bit; they've opened for Slash, they've opened for STEEL PANTHER. And I just finished their new record; that's probably not gonna be out until next year. I've done a couple of different bands. We also have a couple of corporate bands that we do; sometimes they're corporate shows, sometimes they're just live all-star bands. One of them was KINGS OF CHAOS; the other one was ROYAL MACHINES. And believe it or not, they keep you busy. And little TV, movie work here and there; it's not something I set out to do all the time, but things do drop in my lap. I actually just got a song in a really big movie that's about to come out. I'm not gonna announce it yet, but I'm really excited about that."