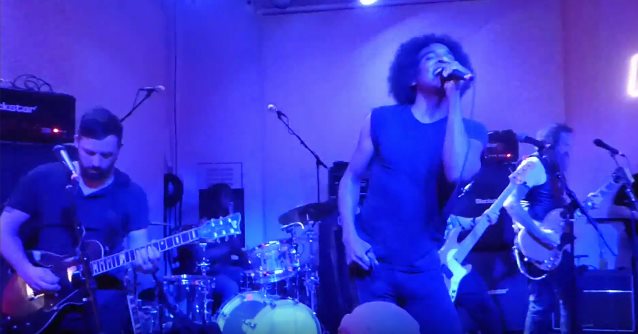 GIRAFFE TONGUE ORCHESTRA, the band featuring ALICE IN CHAINS singer William DuVall alongside members of MASTODON and THE DILLINGER ESCAPE PLAN, made its U.S. live debut last night (Friday, March 17) at The Sunset Room in Austin, Texas during this years South By Southwest (SXSW). Fan-filmed video footage of the performance can be seen below.

GIRAFFE TONGUE ORCHESTRA was forced to cancel its U.S. tour last November after the band's guitarist Brent Hinds (also of MASTODON) broke his leg in a motorcycle incident.

DuVall told the Rock 98-9 radio station about the disc: "It's a serious, serious album, man. I could not be more proud of this thing. We just pushed each other to new heights all around, and it's amazing… It's such a dynamic record, and it's just so powerful. And these are some of the best lyrics that I've ever written, because I was pushed to write to this really cinematic soundtrack."

Regarding GIRAFFE TONGUE ORCHESTRA's musical direction, DuVall said: "It has a lot of what people might expect in terms of heavy, progressive… a lot of riffing, a lot of stuff going on… A lot of beats per minute, a lot of beats per second. I mean, Thomas, he can scramble the eggs like nobody else. So there is a lot of that. There's a feast for the senses. For all the musicians and musos out there, we've got you covered. But as much of that heavy, progressive stuff is there, there are also more, shall I say, straightforward, for lack of a better way of putting it, there's more straightforward tunes, but they still have the drive and the attitude and the go-for-the-throat quality. But, you know, a couple of them you might even be able to dance to as much as headbang to. We all have eclectic tastes, and we wanted to represent all of that."

GIRAFFE TONGUE ORCHESTRA made its live debut at last year's Reading (August 27) and Leeds (August 28) festivals in the United Kingdom.