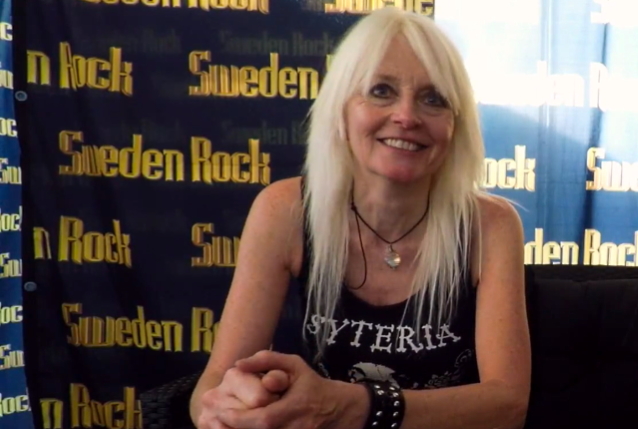 GIRLSCHOOL's JACKIE CHAMBERS Doesn't Consider Herself A Rock Star: 'I'm Broke Most Of The Time'

In a recent interview with The Cosmick View, GIRLSCHOOL guitarist Jackie Chambers was asked for her perspective on the current state of the music business compared to what it was like when she first started working with the band. She responded: "Well, I've now been with GIRLSCHOOOL for 21 years, and so much has changed even in that time. 42 years ago, when the girls started, it was a different industry all together. Some things are better, of course, as in there's a whole new platform for new bands to be heard now with the use of the Internet and without having to be signed to a record deal — of which there were very few to even be signed to then and even fewer now. Now record deals seem like a waste of time when you can take control of the whole thing yourself and miss out the middle man. I do all of it myself in [my other band] SYTERIA, so [I am] learning new things all the time. It's also much harder in some ways too as record sales have been replaced with downloads and streaming, and whereas back then you could earn a good living from selling records/CDs, now we'd have to sell around 20,000 downloads just to make £20, and that's between us, which is why most bands rely on sales of merchandise at their gigs."

Asked how she would define the term "rock star" and whether she considers herself a rock star, Jackie said: "Mmm… A rock star has a very different meaning now to what it did have years ago. Years ago, it would have been all about the flash, cars, a girl or boy on each arm, parties galore, etc., as there was so much money in the industry back then, but now musicians hardly earn anything from record sales, as it's all downloaded and often for free, so not making anything on occasions. So, nope, [I am] not a rock star, if that's the bar… I'm broke most of the time. [Laughs]"

A year ago, GIRLSCHOOL parted ways with longtime bassist Enid Williams. She has since been replaced by Tracey Lamb (formerly of ROCK GODDESS),who previously played with GIRLSCHOOL from 1987 to 1991 and from 1993 to 2000.