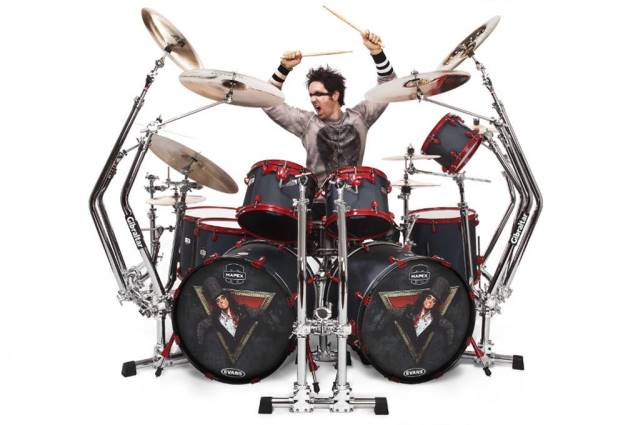 ALICE COOPER drummer Glen Sobel — whose other credits include Vivian Campbell, BEAUTIFUL CREATURES, SIXX: A.M. and IMPELLITTERI — will enter the studio on Monday, December 16 to begin tracking songs for DEF LEPPARD and LAST IN LINE guitarist Vivian Campbell's forthcoming solo record. Sobel is a member of Campbell's club band, SIR SODOFF & THE TRAINWRECKS, which can be seen playing shows around the Los Angeles area.

Campbell revealed via his Facebook page that he is making a rock record which will contain "lots of guitar." He adds: "I intend to sing [on the album]. However, I may ask a real singer to help out if I fail miserably at the demo stages."

Joining Campbell and Sobel in the studio for the making of his new solo album is bassist Lou Castro.

Sobel has also tracked drums for the upcoming Alice Cooper covers record which is due out in 2014. A collection of classic tunes, it will feature a variety of yet-to-be disclosed special guests.

Cooper will resume touring next year, including a confirmed Sweden Rock Festival headline appearance on June 5, 2014.

Drum-cam footage of Sobel's solo from the Cooper band's August 2013 performance in Slupsk, Poland can be seen below.