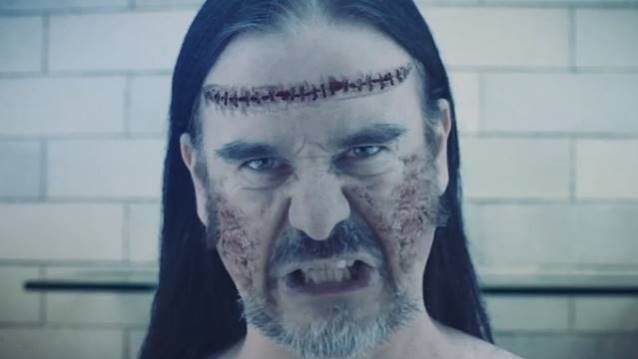 CARCASS is one of several bands who will perform at Hammett's first annual horror convention, dubbed Kirk Von Hammett's Fear FestEviL, which will take place February 6-8, 2014 at The Regency Ballroom in San Francisco, California.

Visit www.FEARFESTEviL.com for the latest information on horror's newest and coolest fan convention.

The third time's the harm, as CARCASS — the Liverpool legends responsible for "Surgical Steel", Decibel's number one album of 2013 — embark upon their first sustained domestic tour in five years. The 2014 Decibel Magazine Tour will fester across North America for 21 putrefying dates, once again seamlessly integrating the past, present and future of extreme music.

Ever-acerbic CARCASS frontman Jeff Walker finds it difficult to contain his enthusiasm. "This is possibly the unsexiest Decibel Tour lineup yet," he quips. "We're all bringing the 'girth' back to the U.S., along with gray hair and sensible footwear. But it's the music that matters, right? Just close your eyes and think of England. If that fails, think of Tampa."

There will be a number of VIP premium packages available in each market, providing you with a T-shirt, poster, "Skip the Line" pass and free digital sampler from Nuclear Blast. The price of this package is less than you would spend on a ticket and a tour shirt at the show!