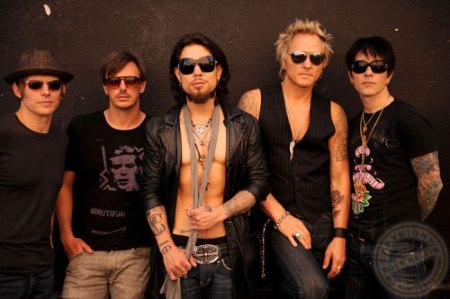 Glenn Hughes (DEEP PURPLE, BLACK SABBATH, BLACK COUNTRY COMMUNION),Billy Duffy (THE CULT) and Steve Stevens (BILLY IDOL) are among the guest musicians who will perform with CAMP FREDDY tomorrow night (Friday, December 3) at the first of three shows as part of the band's fourth annual Christmas residency at the world-famous The Roxy Theatre in West Hollywood, California.

CAMP FREDDY is the Los Angeles-based "jam" group featuring Dave Navarro (JANE'S ADDICTION, RED HOT CHILI PEPPERS),Billy Morrison (ex-THE CULT bassist, current CIRCUS DIABLO vocalist),Matt Sorum (VELVET REVOLVER, ex-GUNS N' ROSES),Donovan Leitch (son of legendary folk singer Donovan),and Chris Chaney (JANE'S ADDICTION, ALANIS MORRISETTE). As in previous years, the CAMP FREDDY members will play a different set list each night — December 3, December 10 and December 17 — and will also have different guest musicians appearing with them at each of the three gigs. There are a very limited number of VIP tickets available for plus booking fees which will give you entry to all three shows, plus access to one of the soundchecks, and an opportunity to attend one of the soundchecks, meet the band and have your photograph taken with everybody. All ticket details are available on The Roxy web site.

In a recent interview with Gibson.com, Navarro was asked if there will ever be a CAMP FREDDY album. "We talked about it for many, many years, but the logistics of something like that really doesn't translate to what we're about," he replied. "We're a live band and we're about the fun on stage and whoever's gonna get up with us — we don't know from night to night. And when you go into a studio to record songs that have already been recorded, it's difficult to recreate that kind of energy and spontaneity, so it's unlikely at this juncture."

Since its formation seven years ago when they rocked the opening of The Standard Hotel in Downtown Los Angeles at the invitation of Brent Bolthouse, CAMP FREDDY has performed on both coasts of America and on national television shows ("The Tonight Show with Jay Leno", "Jimmy Kimmel Live!", "Late Late Show With Craig Kilborn", "Last Call with Carson Daly").